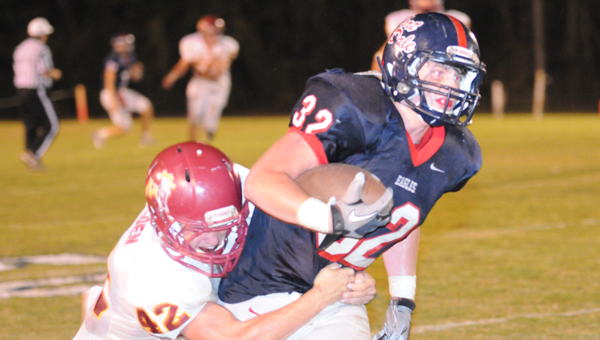 Fort Dale Academy junior running back Chase Whiddon breaks the tackle of Morgan Academy’s Jamie Bearden en route to a 46-yard touchdown. Whiddon and the Eagles snapped a two-game losing skid with a 38-28 win over the Senators. (Advocate Staff/Andy Brown)

The 5-foot-11, 250-pound lineman barreled his way into the end zone from 1 yard out with 42 seconds to play in the second half to put Fort Dale Academy up 35-0 over Morgan Academy.

“It was awesome,” Holcombe said of his first career touchdown. “Everybody is calling me the Fridge now.”

Holcombe learned he would get the carry during a timeout.

“I was shocked,” he said. “We’ve never practiced that play. I’ve carried the ball during tackling drills, but never anything like tonight. (To get a touchdown) in a region game, senior year, on homecoming is unbelievable.”

Holcombe’s touchdown came just more than a minute after junior running back Chase Whiddon scored on a 46-yard reception. Whiddon was spun around by Morgan defensive end Jamie Bearden near the 20-yard line, but was able to avoid his knee touching the ground and outraced the Senators to the end zone for the score.

“We started off pretty good, and then we closed out the first half pretty good with those two touchdowns just before halftime, but we kind of messed it up a little there in the middle,” Fort Dale head coach James “Speed” Sampley said. “But it is what it is. We got a win, and we needed one. We also got to play everyone tonight.”

Fort Dale’s starters sat out the second half.

Junior quarterback Dalton Lee scored on a 2-yard run and also connected with senior Kyle Stewart for a 15-yard touchdown in the third quarter.

Fort Dale junior Chip Taylor scored on a 60-yard run on the game’s first play from scrimmage and found senior Ryan Salter for a 13-yard touchdown on the very next possession. Sophomore Ryan Burkett added a 5-yard touchdown run late in the first quarter.

Selma’s Lauren Rutherford was 4-for-4 on extra-point attempts.

Fort Dale will be back in action Friday when it travel to Troy to  take on Pike Liberal Arts. Kickoff is set for 7 p.m.