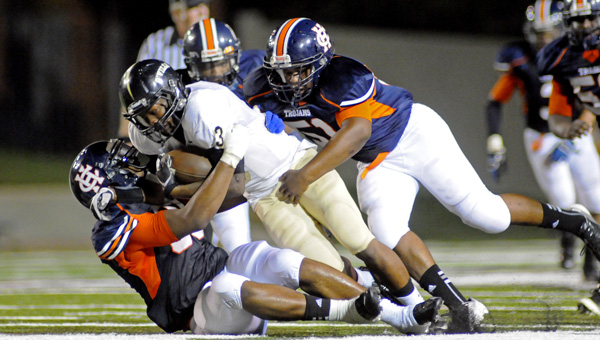 By Ryan McCollough
The Troy Messenger

Greenville and Charles Henderson had played 60 football games against one another prior to Friday night, but more than likely they had never had one quite like the 2012 edition.

The Tigers fell to Charles Henderson 14-13 in a defensive struggle at Veterans Memorial Stadium in Troy.

Greenville pulled within a point of the Trojans early in the third quarter after Kent Riley took a handoff over right end and in for the score. The extra point, which proved to be the difference in the game, sailed wide left and allowed the Trojans to breathe easier down the stretch.

“All in all, it was OK,” said Hill. “Both teams played a hard, tough football game. They were able to make a couple of plays that we couldn’t make, and that made the difference.”

Hill and the Tigers will be thinking of what might have been if not for turnovers and penalties. Greenville turned the ball over to Charles Henderson twice and accumulated 16 penalties during the game.

No less than six of the flags were for false starts against the Tigers.

The Greenville defense stepped up to the challenge of dealing with the powerful Trojan offense. Just one week ago, Charles Henderson put up 37 points on Alabama Christian, but could muster only 14 on Friday.

Tiger linebacker Marlon Davidson snagged a broken up screen pass out of the air, and raced to the end zone for a 57 yard pick six. The score was the first of the game for either team and came midway through the second quarter.

Hill was proud of the way his defense played down the stretch.

“We came back towards the end and got a few three-and-outs and kept us in it down the stretch, he said.”

Greenville will step back in to region play next Friday night against Demopolis.