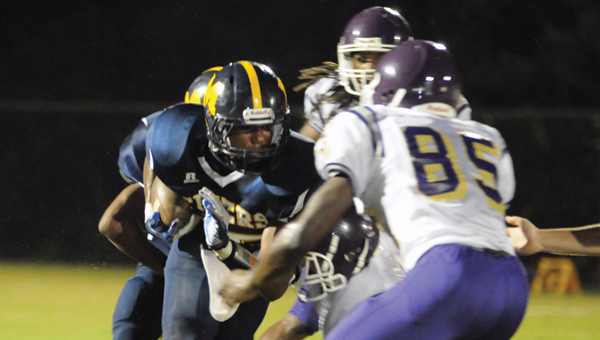 On Friday night, it was obvious why.

The Bulldogs scored 34 first-quarter points en route to a 48-13 win over the Tigers at Williams-Vickery Field in McKenzie.

“We still have a long way to go,” he said. “We have got to correct our mistakes, and we need to continue to grow. This is a chance for us to grow.”

Geneva County jumped out to an early lead when Ulysses Green returned the game’s opening kickoff 90 yards for a touchdown.

Green would also score on a 71-yard run and an 80-yard punt return in the game’s opening quarter.

The Bulldogs, who are averaging 42.3 points per game, scored on their first six possessions of the game and their first possession of the third quarter.

The Bulldogs (3-1, 3-0 Class 1A, region 2) also added a defensive score after recovering a McKenzie fumble in the game’s opening quarter.

McKenzie, which struggled to move the ball on offense for much of the game, added two late scores.

The first came with 4:59 remaining in the game when eighth grade quarterback William Brown hit junior wide receiver Nicarius Peterson across the middle for a 58-yard touchdown.

Oliver Jernberg, a Swedish exchange student playing in his first game of the season, booted the extra point.

On the Tigers’ next possession, Brown and Peterson hooked up again, this time for a 76-yard score.

“I just tried to step up for the team,” Peterson said. “Coach Brown saw that the middle was open and we were able to make a play. I just knew I had to do something for us to score.”

McKenzie (2-2, 2-1 Class 1A, Region 2) will be back in action Friday when travels to Cottonwood High School.