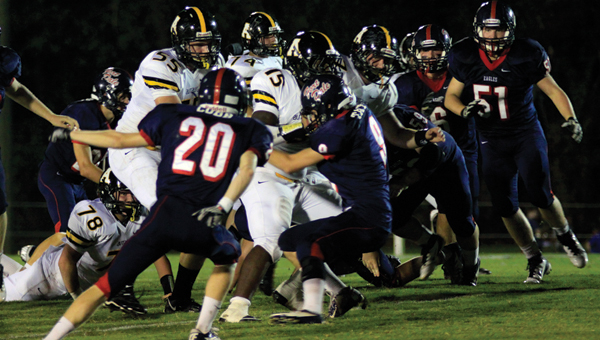 In Fort Dale’s three wins this season, the Eagles have held their opponents to 17 points or less with their lone loss coming in last week’s high-scoring contest. (Advocate Staff/April Gregory)

There’s no rest for the weary.

That old adage may well be the battle cry for fourth-ranked Fort Dale Academy.

Just one week after falling 49-47 in a shootout with No. 3 Autauga Academy, the Eagles (3-1) will face another top-rated program in Monroe Academy.

The Vols (4-0) are ranked No. 5 in the latest Alabama Sportswriters Association poll. While there was plenty of hype surrounding last week’s showdown with the Generals and five-star recruit O.J. Howard, who sat out the game against Fort Dale, this week’s matchup with Monroe carries more weight. Both the Eagles and the Vols compete in Class AAA, Region 2.

The Eagles have already tallied a pair of region wins, while the Vols won their only region matchup of the season.

“(The game with Monroe) is big,” Fort Dale head coach James “Speed” Sampley said after the Eagles’ loss to Autauga.

Sampley reminded his team that winning or losing region games will determine its postseason fate. A win Friday would give the Eagles a leg up in the race for a region championship.

But if the Eagles hope to avenge a 45-7 loss last season, they will have to slow down Monroe’s high-powered offense. In four games this season, the Vols are averaging 39.3 points per game.

A low-scoring game should benefit the Eagles. Since 2000, Monroe is just 1-19 in games when it has scored less than 10 points. By contrast, the Vols own a 69-1 record during that stretch when they have scored 30 or more points.

In Fort Dale’s three wins this season, the Eagles have held their opponents to 17 points or less with their lone loss coming in last week’s high-scoring contest.

FDA and Monroe will face off at 7 p.m. at Volunteer Stadium.