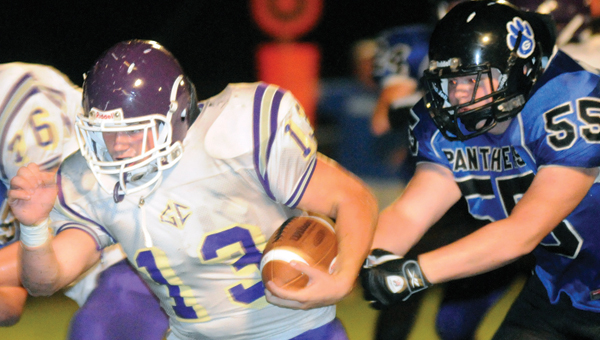 Georgiana’s School was down by more than just points after the 62-14 loss on Friday in a region matchup with Geneva County High School.

After losing quarterback Devin Bonner to a foot injury in last week’s game against McKenzie, Georgiana lost his replacement Jaquez Payton on Friday.

Payton played the first half of the game and scored both of the Panthers’ touchdowns.

Payton’s second touchdown of the night came on a kickoff return of more than 50 yards.

“It started out bad and it got worse,” head coach David Watts said.  “We lost our best player early in the ball game. He was the only one keeping us in the game. We can’t tackle them and that’s my fault. We got to get some guys up there to tackle.”

Geneva was able to put up 35 points by the end of the first quarter and never looked back rolling over Georgiana.

Sophomore Alen Smith took Payton’s place after the freshman was sidelined, but was only able to create 12 yards of offense for the Panthers in the second half of the game.

“First thing is Devin is getting a scan tomorrow on his foot, and I’m about to go to the hospital in a few minutes to find out what is going on with Jaquez and then we’ll put together a plan,” Watts said. “We can’t put our head between our legs and quit.”

Geneva County had 362 rushing yards, 86 passing, nine first downs and was 3-for-3 in passing attempts.

“It’s not about Brantley,” Watts said. “At this point it is about us. We have to work on us obviously and go from there.”