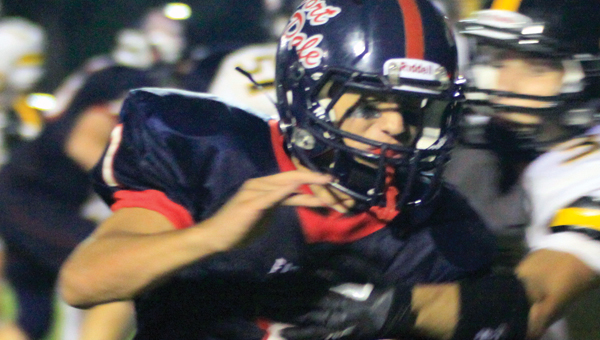 In a game that featured plenty of offense, it was defensive stop that proved to the deciding factor in a top-five showdown between Fort Dale Academy and Autauga Academy.

After Fort Dale sophomore Ryan Burkett barreled his way into the end zone from three yards out with 1:53 left to play in the game’s final quarter, the Eagles trailed the Generals by two, 49-47.

After a timeout, Fort Dale lined up for the two-point try, once again electing to give the ball to Burkett. The 5-foot-10, 155-pound running back carried the ball around the left end before making a plunge for the end zone. For a moment both teams celebrated before the officials stepped in, signaling the try had failed, which all but sealed the win for the Generals.

“(Autauga) made me bounce it outside and I had to dive for the end zone to get in, but I got in,” said Burkett, who finished with two rushing touchdowns. “I know I was in. They said my knee came down, but I know I got in.”

Fort Dale’s Brandon Brown attempted an onside kick on the ensuing kickoff, but the ball bounced high and out of bounds, giving the Generals the ball near midfield.

With 1:53 left to play and just one time out for the Eagles, the Generals were able to get a first down and run the clock out.

“That’s a game neither team deserved to lose,” Fort Dale head coach James “Speed Sampley said. “… That was a disappointing loss, but there were some good things. The biggest thing is we never quit playing.”

Fort Dale junior quarterback Chip Taylor accounted for four scores in the game. The signal caller rushed for two scored, including a 50-scamper, and threw for two more including a 33-yarder to Dow Gardner midway through the final quarter.

Senior Ryan Taylor rushed for an 8-yard score and senior Matthew Bender hauled in a touchdown pass for Fort Dale, which finished with 427 yards of total offense.

The Eagles (3-1) will take on Monroe Friday night in Monroeville. Kickoff is set for 7 p.m.