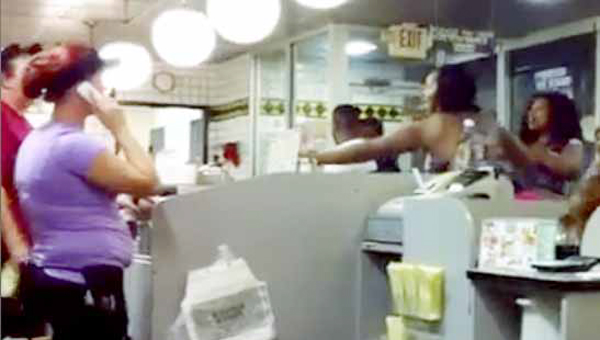 A woman became irate early Sunday morning at the Waffle House in Troy over how long it was taking to cook her omelet, leading to a lamp being broken, and one employee being taken to the hospital.

By Robbyn Brooks
The Troy Messenger

YouTube viewers by the thousands click on cell phone recordings of restaurant brawls and there’s been a new video added to the well-known video site – this time involving a Luverne woman in Troy.

Troy University students Kelsey Wilkes and Luke Sharp were at the Waffle House near McDonald’s early Sunday morning when a woman, identified by Troy police as Erika Raynell Chambers, 21, of Luverne, became irate over the length of time it took to receive her order.

“It was crazy,” Sharp recounted. “This girl got mad about her cheese omelet not being served in a timely fashion.”

“She first came in there and she had a bag of Krystal’s with her, which I thought was rude to begin with,” Wilkes said.

The friends said usual Waffle House customers expect a bit of a wait when they visit the restaurant late on Saturdays or early on Sundays since Troy is a college town.

When the incident happened close to 4 a.m. Sunday, there were about six tables full of customers and people sitting at the bar area.

After about 30 minutes of wait time, Wilkes and Sharp said the woman began to get loud and yell at employees.

She then threw a stapler at a cook, they said.

“She picked up a ketchup bottle and threw it at the woman calling the cops,” Sharp said. “She said police don’t scare me.”

“Then she threw a hot sauce bottle that shattered one of the lights above the bar,” Wilkes added. “It went all over another female customer.”

And the situation escalated even further when the woman and her friend went behind the bar into the employee area.

“She started beating up the cook that was trying to be nice and offer her a cheese omelet ahead of everybody else,” Sharp said. “I thought all Hell was about to break loose. I thought it was about to be a royal rumble in the Waffle House.”

Wilkes said she and Sharp began to record the altercation because they thought they’d never be in a situation such as that again.

But by the time it was over, the pair felt relieved no one was badly injured.

“I was shaking. We thought about getting under the table. I was terrified. You never know nowadays if people have weapons,” Wilkes said.

“We didn’t quite know what to do to help,” Sharp added. “It looked as if there were a couple of men with them watching. It was dangerous.”

Chambers was arrested for third-degree assault, which is a misdemeanor.

One Waffle House employee who hit her head during the scuffle was transported for medical care after the incident.

“That was one of the craziest things I’ve ever witnessed,” Wilkes said. “It blew my mind that it was over an omelet.”