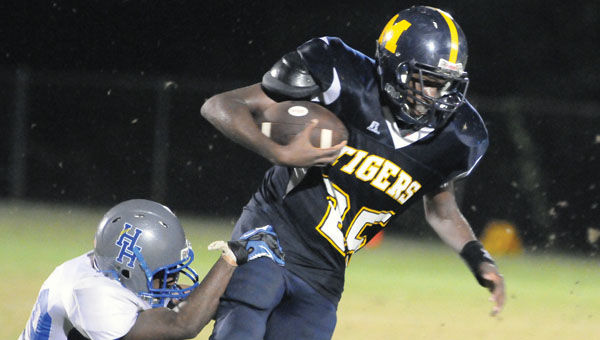 But McKenzie head coach Miles Brown has made it clear to his team that the game won’t be played on paper.

“We can’t let their record fool us,” Brown said. “Red Level has a good football team. They have big linemen and they have very good skill players. That record doesn’t mean a thing.”

Red Level was blanked 34-0 in Week 1 by Choctaw County High School, but was much more competitive in a 44-32 loss to Pleasant Home last week.

Brown, whose team won an emotional contest with in-county rival Georgiana School last week, is concerned about a letdown this week as the Tigers prepare for another rivalry game.

“I think this is the first time I’ve ever had back-to-back rivalry games,” Brown said. “I think it’s going to be pretty tough coming off an emotional win like we had last week, but it’s my job as a coach to make sure that we put that game in the past and get our minds focused on what we have to do to beat Red Level.”

And what the Tigers need to do, according to Brown, is eliminate mistakes.

While Brown believes his team made strides from Week 1 to Week 2, he said there is plenty of room for improvement.

“We have got to do a better job of playing assignment football,” he said. “We had some big letdowns against Georgiana, and we can’t afford to keep having those. We need to correct our mistakes and get better at blocking and tackling. We have got to be a fundamentally sound football team. That’s really what we’re worried about right now. Red Level has a good team, but we need to be focusing on McKenzie, and getting better every day. We’re just going to try and do what we do, and if we can do that well, we’ll give ourselves a chance to win the game.”