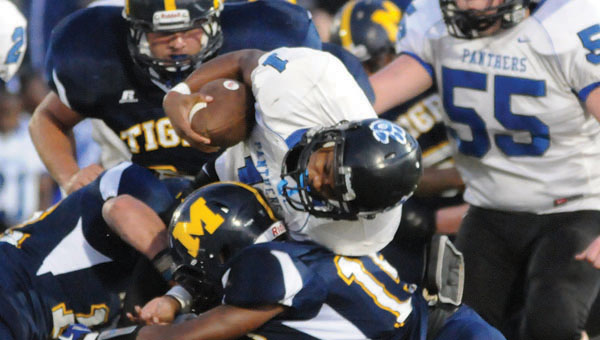 “They have a real physical defense, and they do a good job of tackling,” Watts said. “They haven’t given up many points so far this season.”

Making matters even more challenging for the Panthers is the fact that starting quarterback Devin Bonner is questionable for Friday night’s contest. The senior left last week’s game with McKenzie School midway through the first half with an injured foot.

“We’re not sure if we’ll have him back or not,” Watts said.

In the loss to McKenzie, freshman Jacquez Payton started the game under center, while Bonner started at tailback. Watts said it was a package he and his staff put in specifically for the McKenzie game, and that the plan was to move Bonner back to quarterback during the game.

“Devin is such a hard runner, we wanted to get him the ball in situations that would allow him to run downhill,” Watts said. “We had some plays we put in for Jacquez where Devin was at quarterback, but we had to go a different route once Devin got hurt.”

Watts said if Bonner is unable to play, the Panthers might start sophomore Alen Smith at quarterback. Smith took several snaps during the McKenzie game.

“He’s got some experience at quarterback, and we’ll give him a look,” Watts said. “There are things Jacquez can do at wide receiver that no one else on our team can do, and we’d like to keep him out there if we can.”

If Bonner is unable to play, the Panthers will likely feature a run-heavy offensive attack. The Panthers amassed more than 350 yards on the ground last week, with Payton rushing for 175 yards and freshman Geron Feagin rushing for 91 yards.

“We’d like to run the ball, and control the time of possession, but ultimately the goal is to put the ball in the end zone, so we’ll do whatever we feel gives us the best chance to do that. If Devin can’t go, we’ll probably run the ball more than we normally would,” Watts said.