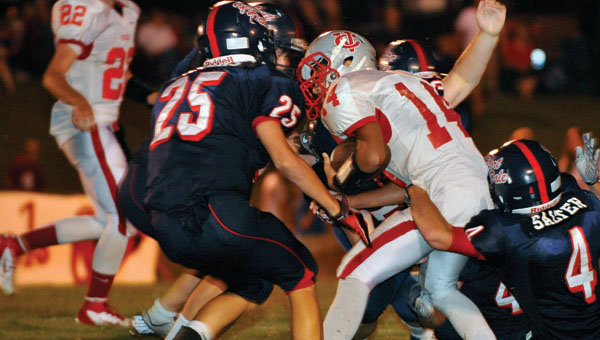 The Fort Dale Academy defense will be charged with slowing down an Autauga Academy offense that is averaging more than 39 points per game this season and features the fifth best player in the country in O.J. Howard. (Photo Courtesy of Bryan Campbell)

Fort Dale Academy and Autauga Academy will face off in a top-5 showdown Friday night in Greenville.

Normally, a matchup between two of the Alabama Independent School Association’s top teams would generate quite a buzz. But the buzz surrounding Friday’s game has more to do with the Autauga’s No. 5 than it does a meeting between the third-ranked Generals and the fifth-ranked Eagles.

The 6-foot-6, 225-pound tight end, rated the fifth best player in the country by Rivals, has verbally committed to Alabama.

“He’s a real good player,” Fort Dale head coach James “Speed” Sampley said. “He’s a big weapon, but the good thing is that he plays wide receiver most of the time, so to get him the ball they have to throw it to him.”

The Generals had little problem getting the ball in Howard’s hands in 2011. The five-star recruit caught 41 passes for 926 yards and 11 touchdowns. He’s once again the focal point of the Generals’ offense, which is averaging more than 39 points per game this season.

“He’s obviously very good, but this team isn’t the O.J. Howard Show,” Sampley said. “They have other weapons. They have a kid that started at cornerback at Prattville (High School) that’s playing tailback and a couple of other kids that have transferred in that are players. They have a real good football team with a lot of athletes. It’s not just O.J. Howard.”

Sampley said if his squad hopes to knock off Howard and Autauga, it must capitalize on scoring opportunities. He said the Eagles turned the ball over three times inside their opponents 25-yard line in a 20-7 win over Hooper Academy last week.

“We’ve got to do a better job of not turning the ball over,” Sampley said. “As good as Autauga is, it doesn’t matter what they do. What really matters is what we do.”