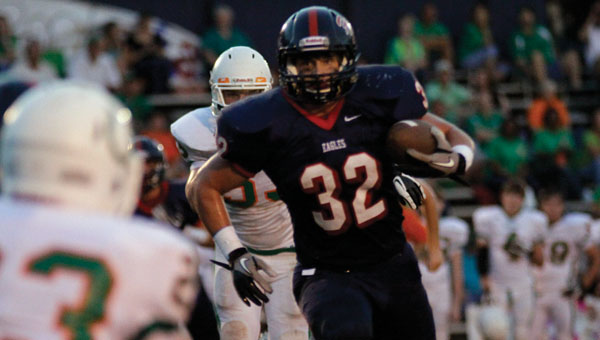 Fort Dale Academy running back Chase Whiddon rushed for 67 yards and two touchdowns to power the Eagles to a 20-7 win over Hooper Academy Friday.

“We had some hard running and good blockers,” Whiddon said. “I give credit to the line. We stuck it in there right before halftime. It was good blocking.”

A successful on-side kick by the Eagles to open the game threw the Colts off balance enabling Fort Dale to score a touchdown midway through the first quarter and take a 6-0 lead.

FDA running back Ryan Burkett added another score in the second quarter to extend the Eagles’ lead to 12-0.

Whiddon capped the scoring just before the intermission with his second touchdown of the night.

“We had a couple of miscues with each other but overall we retaliated and made it all better,” FDA offensive lineman Davis Crocker said. “(Whiddon) scored us two touchdowns and gave us that win.”

Hooper gained some steam in the second half by holding the Fort Dale offense to zero and added a touchdown to the scoreboard after charging down the field in the fourth quarter. However, it was Fort Dale’s defense and more Colts’ penalties that kept Hooper from having a chance at stealing the win.

“It was a really big win for us because of the region situation,” FDA head coach James “Speed” Sampley said. “We played hard. We held them to seven points, which is a big night for us defensively.”