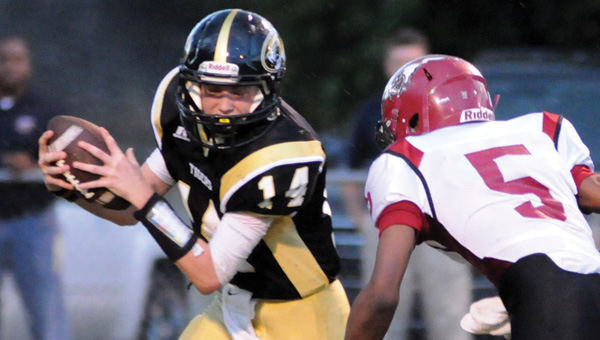 Greenville dug an early hole falling behind by three scores in the first quarter, the first of which came on the opening kickoff when the Tigers mishandled the kick allowing the Mustangs to scoop up the loose ball and score their first touchdown just seconds into the game.

“Mental mistakes early really cost us,” Greenville Middle School head coach Daniel Ingram said. “We had an uphill climb all night. Millbrook is a very big and physical team. You can’t make as many mistakes as we did and expect to beat them.”

While Ingram was disappointed with the outcome, the second-year head coach applauded his team’s effort.

“I was very proud of how we responded in the second half,” Ingram said.

Ingram was also encouraged by the play of quarterback Brandon Simmons who accounted for four touchdowns for the Tigers, two on the ground and two through the air.

“He had a great night,” Ingram said of his quarterback.

“I’ve been involved with GMS football for six years, and if I’m not mistaken that’s our first field goal ever,” Ingram said.