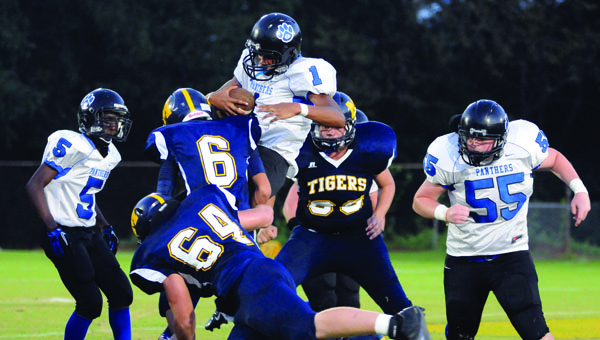 A 28-point second half powered McKenzie School to a 54-28 win over in-county rival Georgiana School Friday night in McKenzie.

With the win, the Tigers extended their win streak to five games over the Panthers.

“That was a great team effort,” McKenzie head coach Miles Brown said. “Every single player on this team pulled together to make this happen. This is a great win for our team.”

Five different Tigers scored a touchdown in the win.

Wide receiver Nicarius Peterson led the McKenzie ground attack with more than 100 yards and three scores. The 5-foot-11, 160-pound junior scored on three end arounds, including a 99-yard dash with 8:10 to play in the second quarter.

The touchdown, which gave McKenzie a 20-6 lead, was set up by a goal line stand by the McKenzie defense.

Peterson also scored on runs of 6 yards and 25 yards.

McKenzie’s second touchdown of the game was also set up by the McKenzie defense when senior Christian Estes pounced on a loose ball at the Tigers’ 27 yard line.

Two plays later freshman wide receiver Condie Pugh spun out of the grasp of a pair of Georgiana defenders and raced 42 yards for a touchdown.

Sophomore running back Ty Adams scored on runs of 4 and 50 yards, while sophomore quarterback Terrance Clemmons and sophomore wide receiver Sawyer Kendrick scored on runs of 13 yards and 7 yards, respectively, to help the Tigers pull away from the Panthers.

The first came early in the first quarter when the Tigers mishandled a punt and Oikle fell on the ball in the endzone. He was later on the receiving end of a 17-yard touchdown pass from freshman Jacquez Payton.

Georgiana senior running back Carlo Mitchell scored on a 6 yard run and Payton capped the Panthers scoring with a 16-yard run as time expired.

Kickoff for both games is set for 7 p.m.