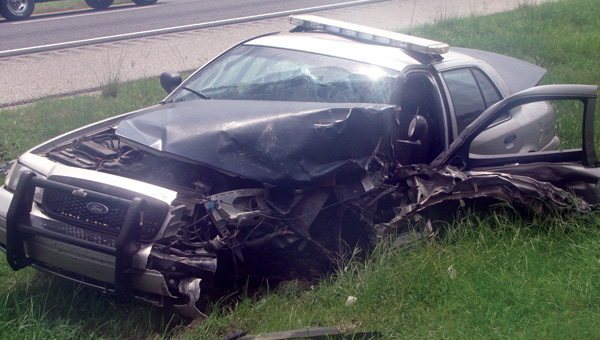 A high-speed chase that ended in Butler County on Monday resulted in a death and three damaged patrol cars. (Courtesy Photo)

A suspect involved in a high-speed chase that ended in Butler County has died from injuries sustained after he crashed his vehicle into an Alabama State Trooper’s patrol car on Monday.

The suspect was air lifted to Baptist Medical Center South in Pensacola where he was later pronounced dead, according to Alabama State Trooper Kevin Cook.

The chase ended on the southbound off-ramp at mile marker 114 on Interstate 65.

The Butler County Sheriff’s Office and the Greenville Police Department became involved with the pursuit near mile marker 130.

According to Alabama State Troopers, motorist reported that a gray pickup truck was traveling north at a high rate of speed and driving recklessly. At 12;15 p.m., troopers were dispatched to the area and initiated pursuit near mile marker 137 when the driver of the pickup refused to stop. The truck continued traveling north on I-65, running other vehicles off the road and striking two Greenville Police Department patrol cars and an Alabama State Trooper patrol car.

“As they went back north of Greenville, he struck one of the police vehicles in the rear end and caused it to lose control and skidded out,” said Lt. Justin Lovvorn of the Greenville Police Department. “His vehicle was not drivable after that. The suspect continued on southbound and as they go past the Greenville exit, he struck the other Greenville unit in the side.”

Spikes were spread across the roadway several times before the suspect ran over the spikes near mile marker 118, Harden said. The chase ended when the individual crashed into another patrol car on the off-ramp at Exit 114.

Butler County Sheriff Kenny Harden said it has not been determined what caused the initial pursuit. The incident is still under investigation by the Alabama State Troopers.

Authorities are not releasing the suspect’s name at this time. Harden confirmed that he was not a Butler County resident.

No law enforcement officers or other motorists were injured during the incident.