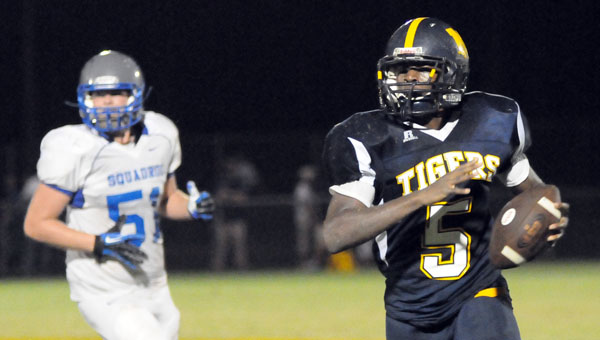 Dunn, making his first start at quarterback after moving over from wide receiver to replace Kase Kelly, tossed both of his touchdown passes to junior wide receiver Arthur Teague in the game’s opening quarter.

He added an 88-yard touchdown run in the second quarter to give Highland Home a 27-0 lead at the intermission.

“We had too many miscues on our part, and you’re not going to beat a good team like Highland Home if you make as many mistakes as we did,” McKenzie head coach Miles Brown said. “Give Highland Home credit, they made plays, but we have a lot of things we need to correct.”

Late in the third quarter McKenzie finally found the end zone when sophomore quarterback Terrance Clemmons hit freshman wide receiver Condie Pugh for an 18-yard touchdown on a fourth-and-15 play to cut the lead to 27-6.

“Our guys kept fighting until the end, and I’m proud of that,” Brown said. “We can build on that. They got down, but they never quit.”

Highland Home junior running back Lewis Johnson dashed any hope the Tigers had of a late-game comeback when he barreled into the end zone from 8 yards out with 6:40 left to play.

Highland Home senior defensive back Dalton Fiduccia ended a McKenzie scoring threat with just more than two minutes to play when he intercepted a Clemmons pass and returned it 93 yards for a score.

McKenzie will be back in action Friday when it plays host to in-county rival Georgiana School. Kickoff is set for 7 p.m.