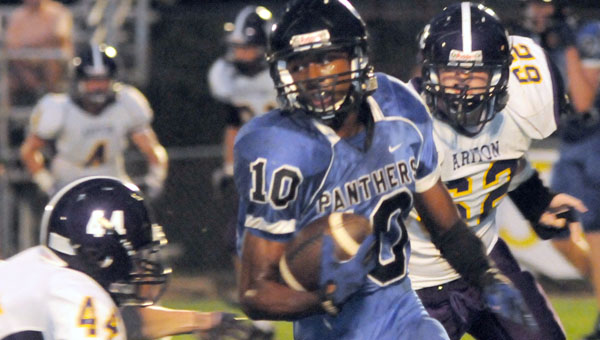 As the full moon rose over Harmon Stadium, so too did the tension between the Georgiana Panthers and the Ariton Purple Cats.

With both teams coming off disappointing 2011 seasons, it was clear that there was something to prove on both sides. At the end of the night, Ariton seemed to want it just a little bit more as they held off Georgiana for a 40-27 victory.

Things started off with a bang after an Ariton 35-yard touchdown pass barely four minutes into the first quarter.

Not to be outdone on their home field, Georgiana quickly responded with a nine-yard score from Devin Bonner to Jacquez Payton that was set up by a clutch fourth-down conversion.

Ariton returned the favor with an impressive drive that covered the length of the field, but the Georgiana defense dug deep and put up an impressive goal line stand. Payton led the defensive effort with a crucial tipped pass on fourth down, just four yards shy of the end zone. However, a high snap on the following Georgiana drive turned the defensive stop into a quick seven points for Ariton as they recovered the fumble in the end zone for a touchdown, putting Ariton up 14-7.

“When we turned the ball over in the end zone and they got it for the touchdown, you could just see our guys go flat,” Georgiana head coach David Watts said. “It’s not the physical part of the game that’s killing us. It’s the mental part, and we’ve got to get past that.”

Payton proved the star of the night for the Panthers on both sides of the ball, but Watts said that there is still room for him to improve.

“As a ninth grader, he’s a man amongst boys,” Watts said. “But he’s still a ninth grader.  He got us two 15-yard penalties. If we can get him to the point that he sees the whole picture, he’s going to be some kind of player.”

Georgiana will face in-county rival McKenzie next Friday in McKenzie. Kickoff is set for 7 p.m.