FDA rolls past Rebels, improves to 2-0 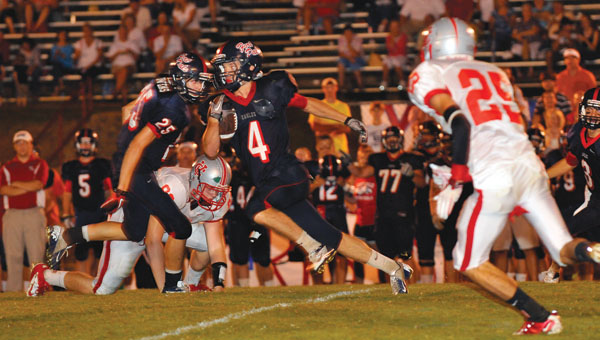 The Eagle’s momentum was ignited in the first quarter when senior Taylor Windham recovered a fumbled punt return by Coosa Valley and returned it for a score.

The defensive touchdown quickly lead to an offensive one after a recovered onside kick led to quarterback Chip Taylor rushing for a 51-yard touchdown.

“Coming out in the first half and returning the punt return fumble for a touchdown was a big play, and then coming out again with an onside kick and scoring,” Chip Taylor said.  “Really, the first couple of drives were a big momentum turn for us.”

Fort Dale was able to widen the gap with a touchdown pass by Chip Taylor and a 4-yard run by Ryan Taylor giving Fort Dale a 35-3 lead going into the half.

“I told them that we need to finish,” Sampley said. “Half a game is not a whole game.”

The Eagles listened and followed up strong in the second half with an interception by wide receiver Ryan Salter in the third quarter that was followed by two more FDA touchdowns.

Chip Taylor was the leading rusher with nine carries for 110 yards and also completed 9-of-16 pass attempts for 160 yards.

Ryan Burkett had two carries for 65 yards and Ryan Taylor had six carries for 44 yards helping the team total 303 yards rushing and 463 yards of total offense.

The leading receiver was Dow Gardner with two catches for 52 yards.

Caleb Whigham, Windham and Harris all had fumble recoveries and Patrick Russell was 7-for-7 on point after attempts.

Fort Dale will face off in a region game against Hooper at home next Friday.