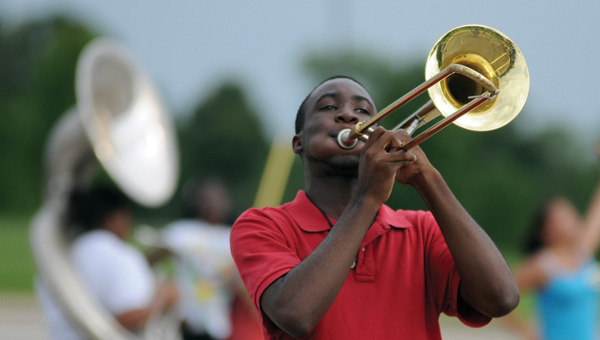 Greenville High School freshman trombine player Devin Gavin is part of the largest band at GHS in decade. Gavin is one of 115 students in the Tiger Pride Marching Band. (Advocate Staff/Andy Brown)

Greenville High School’s halftime shows will be featuring twice the amount of sound this year.

The Greenville High School community will be seeing the largest band perform during halftime in more than 10 years.

The GHS Tiger Pride Marching Band has nearly doubled in size since last year, growing from 63 to 115 students.

“We have experienced a huge growth in our band program,” GHS Band Director Jason Tucker said. “This year, we have added a dance team to our auxiliary units, which also includes majorettes and color guard.”

The band has been practicing every day to teach 41 new marchers the ins-and-outs of marching and playing. New members have been added to every section across the band including twice as many color guard members, with additional marchers in auxiliary and instrumentation.

“This is different than most years; usually as seniors graduate and new students move into the program from middle school you only have around 25 percent of your band as new marchers,” Tucker said. “This year we will have 36 percent of our band – over one third – as new members.”

This year the band will be performing music from the hit TV series “Glee,” which will include songs from Journey, Lady Gaga, Men without Hats and Aerosmith.

With the rapid growth, the band faces new challenges in working with younger students as well as new marchers on the field.

“The problems you face at our size now are very different from the problems that face a smaller band,” Tucker said. “I want the kids to adapt to the transition and enjoy what we’re building at Greenville; and that’s a goal that the band students have been eagerly working toward the last several weeks.”