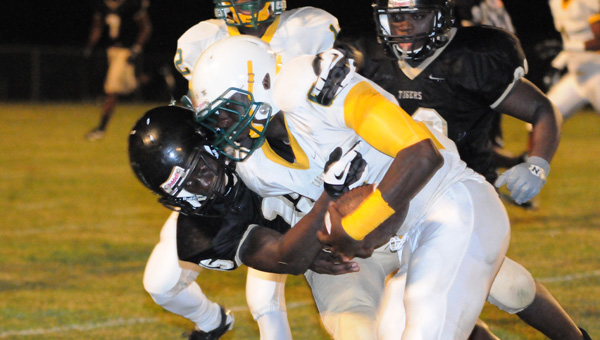 “They’ll come up and hit you,” Hill said.

Greenville’s second-year head coach said the Bulldogs, who finished the 2011 season with nine wins and advanced to the fourth round of the Class 4A playoffs, will offer a stiff test for the Tigers.

“They lost a very good running back, but their backup is back and he’s just as good,” Hill said. “Their quarterback is back. They have three offensive linemen returning that are very good players.”

“They have a good defense,” Hill said. “They run to the ball and they’ll hit you.”

“I thought the offense did well,” he said. “Coach (Richard) Kelly did a good job calling the game. (Quarterback) Harper (Vinson) played well. The offensive line came off the ball. The running backs ran hard and the wide receivers caught the ball. Overall I thought we did well on that side of the ball. We’d have liked to have put some more points on the board, but it was a good test for us (to play Carver) and I think it’ll help us against Anniston.”

Hill said the Tigers, who are still adjusting to their new offense, will keep things simple Friday night.

“It’s still early,” he said. “We can’t make things too complicated. We’re going to keep doing the things we’ve been doing and try to eliminate any mistakes.”

Greenville will take the same approach on defense.

“We’ll be pretty basic,” Hill said. “We’re going to run to the ball and try and play physical.”

Kickoff for Greenville’s showdown with Anniston is set for 7 p.m. at Tiger Stadium.