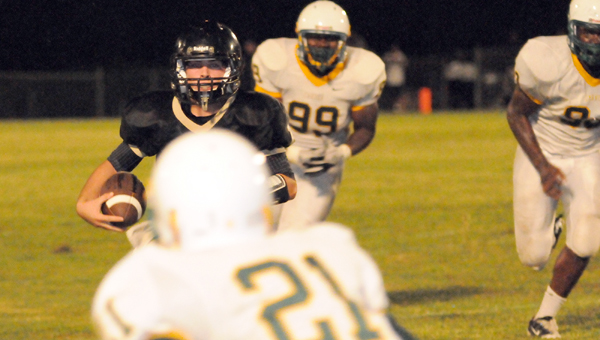 Carver High School senior quarterback Jeremy Johnson threw for two touchdowns and ran for another to power the eighth-ranked Wolverines to a 28-0 win over Greenville High School Friday night in a preseason jamboree at Georgiana’s Harmon Field.

The Tigers and the Wolverines squared off for two quarters with both team’s starters playing the majority of the snaps.

Johnson, a 6-foot-6, 215-pound Auburn commitment, led the Wolverines to scores on each of the team’s first two possessions. The Wolverine signal caller found junior Draequon Murphy for a 15-yard touchdown on the opening possession of the game, and after Carver recovered the ensuing kick, Johnson connected with junior Charles Standberry for a 10-yard score.

“We didn’t play the first two series,” Greenville High School head coach Earnest Hill said. “We gave them a couple of plays and they punched it in on us.”

Greenville managed to force a three-and-out on Carver’s third possession, and the Tigers began to mount a drive. Greenville quarterback Harper Vinson completed three passes to three different receivers, and made plays with his feet before a tipped pass was intercepted and returned for touchdown, boosting the Wolverines’ lead to 21-0.

“That play could have been a touchdown or a first down,” Hill said. “It got tipped and he made a play. Carver made plays. … That’s a heck of a football team. It doesn’t matter if they are (Class) 6A, or 5A, that’s a great team. That’s the level we have to get to.”

Johnson capped the scoring with a 7-yard touchdown run.

The Tigers defeated Hillcrest-Evergreen High School 13-0 on Friday in a contest that also lasted two quarters.

Greenville scored its touchdowns on its first two possessions of the game.

Junior Donta Lee got Greenville on the scoreboard when he broke free for a 16-yard touchdown run.

Greenville will open its regular season Friday night when it hosts Anniston High School. Kickoff is set for 7 p.m. at Tiger Stadium.