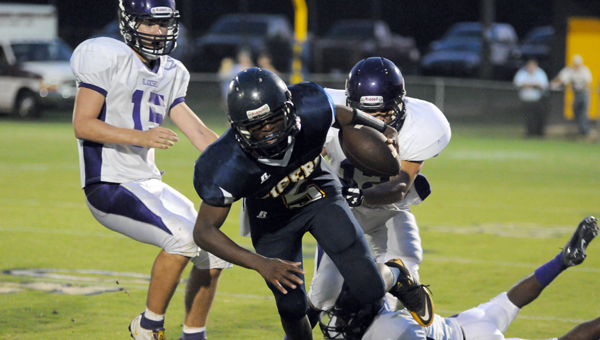 After jumping out to a 20-0 lead with 9:43 to play in the third quarter, the Tigers watched their lead dwindle to just six points, as the Bulldogs scored on runs of 6 and 18 yards early in the fourth quarter and threatened to take the lead with just more than two minutes remaining in the game after driving deep into McKenzie territory.

“We had them where we wanted them and we let them back in the game,” McKenzie defensive coordinator Ezell Powell said. “We missed some assignments and gave them chances to make plays. We can’t afford to be undisciplined.”

After forcing the Bulldogs into a fourth-and-8 situation, the Tigers were caught off guard by a halfback pass that resulted in a 30-yard gain, giving the Bulldogs a first down at the McKenzie 35-yard line.

The Tiger defense was able to recover and forced a turnover on downs with 17 seconds on the clock and sealing the victory.

“I’m proud of how hard we played,” McKenzie head coach Miles Brown said. “When we had to stand up there at the end, we did. We have to cut out the mistakes, but I’m proud of the effort.”

McKenzie wasted little time in finding the end zone. On their opening drive, the Tigers marched 70 yards in nine plays for a score. Junior wide receiver Nicarius Peterson capped the drive with a 33-yard scamper on and end around. Peterson then handled a high snap on the point-after attempt allowing Colby Booker to bang the kick through the goalpost to give the Tigers a 7-0 advantage.

McKenzie then found the end zone again on its second possession when sophomore running back Ty Adams broke free for a 65-yard run. Booker’s extra point gave the Tigers a 14-0 lead heading into the intermission.

The Tigers scored their third and final touchdown on their first possession of the second half when sophomore quarterback Terrance Clemmons connected with Peterson for a 26-yard scoring strike.

McKenzie will open its regular season at home next Friday night against Highland Home High School. Kickoff is set for 7 p.m.