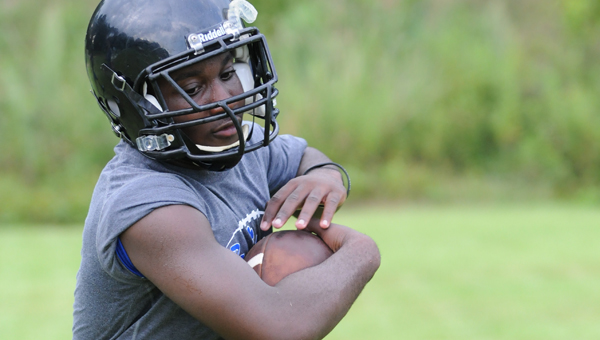 Georgiana School senior running back Carlo Mitchell and the Panthers will take on Luverne High School Friday night in a preseason contest. The game will start at 7 p.m. in Luverne. (Advocate Staff/Andy Brown)

After a 2-8 season in 2011, Georgiana School has something to prove.

But according to second-year head coach David Watts, the Panthers aren’t looking to prove anything to anyone but themselves.

“We are motivated to show that we are a much better team this year,” Watts said.

Georgiana’s first chance to prove its an improved squad will come Friday when it hits the road to take on Class 3A Luverne High School at Glen Daniel Stadium.

“Since we played Luverne early last year, this game will be a good measuring stick for how far we have come,” Watts said.

The Panthers’ head coach said he hopes to see more physical play from his team on Friday night, as well as solid execution by his offense.

“The most improvement that a team sees during the year is usually from the first game to the second game,” Watts said. “This gives us a chance to make some mistakes that we can fix without the pressure of a regular season game.”

Watts said he elected to play Luverne, which will dress nearly twice as many players as Georgiana, in order to test his team.

“I think playing a bigger school with the history and tradition of Luverne is good for us,” he said. “They will be very good and we will get to find out a lot about ourselves.”

And that, Watts said, is really what Friday’s contest is all about.

“We will get a good gauge of where we are as a team from this game,” he said. “This is a preseason game, so were not game planning to stop anything they do or attack any certain areas. This is a practice, so we will work on some things that will make us better later in the season.”

The Panthers and the Tigers will square off at 7 p.m. in Luverne.