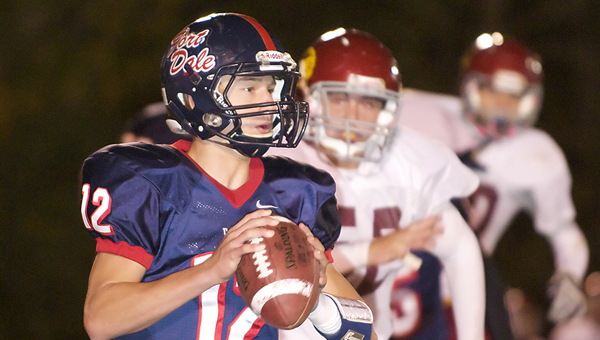 When No. 6 Fort Dale Academy opens its 2012 season on Friday, the Eagles will be facing two opponents – Escambia Academy and the unknown.

After nine years, Heath Gibson is out as coach of the Cougars. In his place will be former Charles Henderson High School head coach Hugh Fountain.

“We don’t have any exact knowledge of them because they haven’t played anyone,” Fort Dale head coach James “Speed” Sampley said. “We know what he did at Charles Henderson, but that may change (at Escambia). That makes it a little tougher because we’ll have to prepare for a lot of different things.”

“They came out in the spring game and they threw for 600 yards in their two spring games and rushed for another 350 or something,” Fountain said. “So, you’ve got to be ready to stop both areas, which is not going to be easy this early in the season. I think they scored something like 12 touchdowns in the spring games.”

Sampley, who elected to install the pistol offense following a 4-7 season in 2011, downplayed the numbers his team posted in the spring and preseason contests with Crenshaw Christian Academy and Lee-Scott Academy.

“All of that is over,” he said. “That was preseason. It starts for real now, and we have a lot of work to do to get to where we need to be to win games.”

New offense or not, Fountain expects a tough challenge from the Eagles, who have traditionally ended the season near the top of Class AAA.

The Eagles and Cougars will face off at 7 p.m. at Bachelor Field in Atmore.