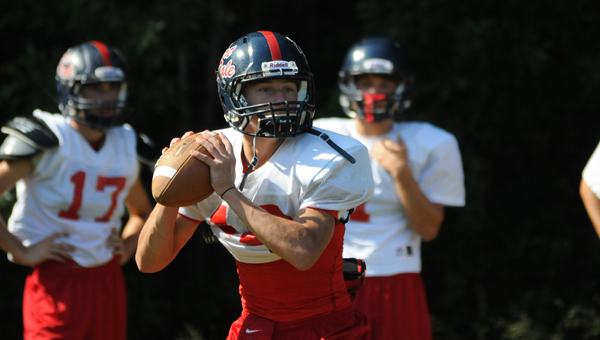 Fort Dale Academy junior quarterback Chip Taylor and the Eagles are transitioning from a shotgun offense to a pistol offense. (Advocate Staff/Andy Brown)

Just more than two weeks out from the start of its 2012 campaign, Fort Dale Academy is continuing to fine tune its offense.

After a 4-7 season in 2011, Fort Dale head coach James “Speed” Sampley made the decision to overhaul the Eagles’ offense heading into the team’s 2012 campaign to better suit FDA’s returning personnel.

The Eagles, who averaged 21.3 points per game last season, are transitioning from a shotgun offense to a pistol offense.

“We’ve come a ways, but it’s still a work in progress,” Sampley said. “We aren’t there, but we aren’t supposed to be in midseason form yet.”

Sampley cited the center to quarterback exchange as an area that needs improvement.

“It’s an adventure every time we snap the ball right now,” he said. “That’s something we’ve got to get fixed. If we can’t get the ball to the quarterback, it doesn’t matter what offense we run.”

“He was never really able to come back from that,” Sampley said.

Junior Chip Taylor will return at quarterback for the Eagles.

“In the pistol we’re a little closer than we were in the shotgun, so the snap should be easier, but we seem to be struggling with it more than we should, but we’ll get it ironed out,” Sampley said.

In the pistol offense the quarterback lines up four yards behind the center rather than seven yards, as with the shotgun formation. The running back lines up three yards directly behind the quarterback, as opposed to next to him as in the shotgun.
University of Nevada head coach Chris Ault developed the pistol offense in 2004 as a way to add a power running game to the spread formation.

Sampley said the Eagles might also line Taylor up under center at times.

“The best thing about the pistol is that it’s basically the I (formation),” he said. “We can move Chip under center and still run the offense.”

Fort Dale’s new offense will be on display Friday night when the Eagles square off with Crenshaw Christian Academy in a preseason scrimmage at 6 p.m. at FDA. The Eagles will open their 2012 season Aug. 24 at Escambia Academy.