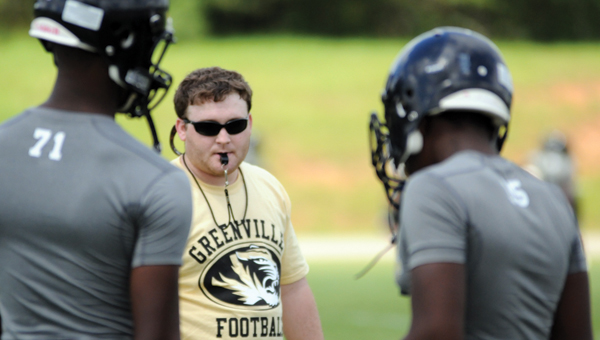 Greenville native Digger Kimbro moved to Birmingham in search of his dream.

What he found was a nightmare.

After graduating from Troy University with a degree in physical education, Kimbro began chasing his dream of landing a coaching job. When he failed to break into the public school system, he took a job as a deliveryman for Birmingham Budweiser.

For nearly two years, Kimbro made deliveries in the Birmingham area, while continuing to send his résumé to schools.

“It put food on my table, but I was still hoping to get into coaching or teaching,” Kimbro said.

Oddly enough, the job that allowed Kimbro to earn a living while continuing to pursue his dream nearly cost him his life.

In December, Kimbro was one of three people shot during a failed robbery attempt of a Birmingham-area bar. Kimbro was making a delivery to Wallace’s Lounge, an Ensley neighborhood bar in the 300th block of 19th street in Birmingham, when Ivan Batain shot him in the shoulder. The bullet ricocheted downward through his body, going through his lung, liver and small intestine.

Kimbro spent the next 21 days at UAB Hospital and underwent multiple surgeries to repair the damage. For much of that time, Kimbro was listed in critical condition.

“It was scary,” Kimbro said. “Being in that situation really opened my eyes.

“After being shot I started to think that Birmingham didn’t like me too much,” he joked.

During his nearly month-long stay in the hospital, his then girlfriend Tiffany Burkett rarely left Kimbro’s side as he fought for his life. The couple has since married.

“It brought us closer together,” he said. “That whole incident seemed to help me make the decision that it was time for me to ask her to marry me.”

It was while on his honeymoon in Jamaica in July that Kimbro learned of the vacancy on Greenville High School head coach Earnest Hill’s staff.

“I had waited and waited for two years to get a call about coaching, and never did, and then I go on my honeymoon and start getting calls,” Kimbro said with a laugh.

After returning from his honeymoon, Kimbro contacted Hill and interviewed for the position.

“I had talked to a lot of people from around here and found out that Digger was a hard worker,” Hill said. “That’s what I want in my coaches. He doesn’t have a lot of experience, but knowing that he was willing to put in the work made the difference.”

For Kimbro, what was once a nightmare has turned into a dream.

“This is a great opportunity for me,” Kimbro said. I’ve waited for this for a long time, and I’m really excited to be a part of Greenville High School’s coaching staff and to have the chance to come home. I really feel like this is a dream job. I know it’s going to be a big challenge, but I’m up for it.”