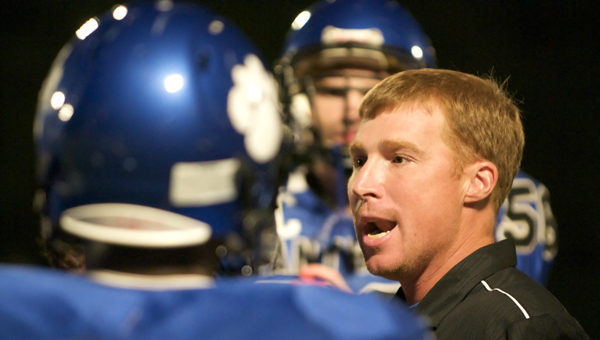 As the summer draws to a close, so does Georgiana School’s battle between its two candidates for the starting quarterback position.

Coach David Watts said that they are playing both Devin Bonner and Jacquez Payton, and they will probably continue to do so.

But he has found a suitable combination that works for him.

“Jacquez Payton is also working at receiver, and he just so happens to be one of the biggest offensive threats we have,” Watts said. “Both guys are very capable at quarterback, but the combination of Devin at quarterback and Jacquez at receiver just works better for us as a team.”

Watts commended Bonner in particular for the level of intelligence he has shown, and he said it’s “like having a coach on the field.”

However, there are still quite a few question marks for the Georgiana offense, particularly on the offensive line.

The current line is relatively inexperienced. The Panthers have one returning lineman on their roster and another veteran if he can overcome an injury.

“I’ve got another guy that’s dealing with an injury but, unless he comes back, everybody else will be first-year players.”

What they lack in experience is more than compensated by their pure athleticism, according to Watts.  Size will also be on their side, and Watts said that they definitely have an opportunity to improve upon last season.

“We’ll be athletic across the entire front, and those guys move very well,” Watts said.

One of the biggest intangible advantages that the Panthers have over last season is the inclusion of veteran defensive coordinator George Kennedy.

Watts said that Kennedy has proven invaluable to the offense and defense alike.

“The big thing with Coach Kennedy is he’s got a lot of experience,” Watts said. “He’s the guy you can lean on because there’s not much that he hasn’t seen, or things that are going to pop up that he hasn’t dealt with.  He’s a good teacher, and the kids are picking it up.”