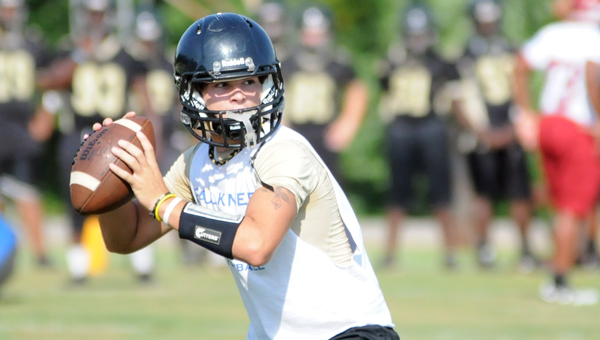 What a difference a year can make.

Heading into the 2011 season, Greenville High School head coach Earnest Hill wasn’t sure what he could expect from his new team. Hill, who had been hired last April to replace Ben Blackmon, brought a new system on both sides of the ball, and a more hard-nosed attitude. This season, the Tigers know exactly what to expect from their coach.

Even with all the changes, the Tigers managed to post an 11-1 record and advance to the second round of the Alabama High School Athletic Association playoffs.

Expectations are high for Greenville in 2012 after winning the region championship last season, but Hill and the Tigers aren’t resting on their laurels.

“We had a good summer,” Hill said. “These kids busted their tails and came to work every single day. I feel like we got better this summer.”

Hill emphasized that it’s a new season, and what the Tigers were able to accomplish last season is ancient history.

“We have a tough schedule this season,” Hill said. “I think it’s tougher than last season. We have to deal with Jackson and Demopolis. Saraland is on the rise, and we have to go Selma. That’s a lot different than playing them at home. We also have to go over to Troy and play Charles Henderson. That’ll be a tough game. We’re going to have to get better and better each week to be able to compete.”

One way Hill plans to ensure that the Tigers improve is by making sure the right players are in the right position.

The most noticeable change will be at quarterback where junior Harper Vinson will take the snaps. Senior Kent Riley, who started for the Tigers last season, will move to wide receiver.

“This summer I asked Harper to get better every day,” Hill said. “That’s all I wanted him to worry about, and I feel like he’s done that. I also think that Kent is adjusting to his new role. He’s the most dangerous player on our roster, and when he gets the ball in space he can make a lot of things happen. We feel like moving him out to wide receiver, and using him like we used Jamall (Hamilton) last year, will help us get him the ball in situations where he can make plays for us.”

On defense, senior Ozell Carter has moved from linebacker to defensive end to help shore up a front line that was hit hard by graduation.

“When he plays like he’s capable of playing, nobody can block him,” Hill said. “He can help us up front.”

Hill has also shuffled his defensive backfield, moving senior Jonathan Robinson from cornerback to safety and junior Debryant Crenshaw from safety to cornerback.

Greenville will open its regular season Aug. 31 against Anniston High School at Tiger Stadium. Kickoff is set for 7 p.m.