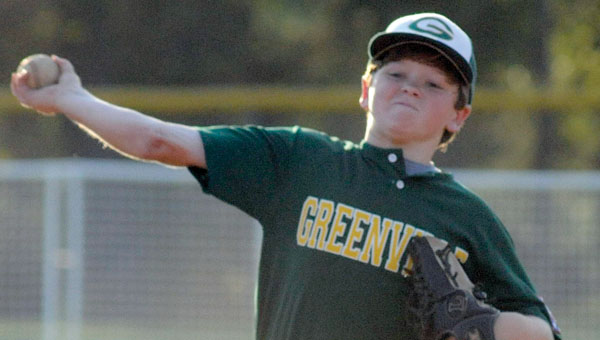 The Greenville Dixie Youth Majors chase for a state championship came to an end Tuesday.

“It was a great game,” Greenville head coach Keith Taylor said. “Both teams really played well, and they were able to take advantage of a couple of mistakes we made and that was the difference in the game. Both teams played hard, and it was just a great game.”

Greenville jumped out to an early lead with four runs in the first inning.

Tripp Richardson and Anthony Sellers started the rally with singles. Luke Taylor then belted a double to plate two runs before Braxton Daniels smacked a two-run home run to give Greenville a 4-1 lead.

“We got off to a great start,” Taylor said. “We hit the ball and were able to push four runs across with our first four hitters.”

Suburban West knotted the game at 4-all in the third inning, and neither team would score again until the seventh inning. Both teams pushed a single run across in the frame.

Due to Dixie Youth rules, which prohibit a pitcher from pitching more than seven innings in a single game, both teams were forced to make a pitching change in the eighth inning.

In the end, a walk followed by an error and a two-RBI single powered Suburban West to the win.

Sullivan Harold and Sellers each had two hits for Greenville in the loss.

“We’re unhappy to be home, but I’m proud of these guys and the way they played,” Taylor said. “They have a lot of talent, and I feel like we were one of the best teams up there. I wish we were still playing, but I’m proud of what these kids accomplished.”

Greenville opened the tournament with a 7-6 win against tournament-host Hokes Bluff before falling to Bellingrath 7-0 and Suburban West 7-5.