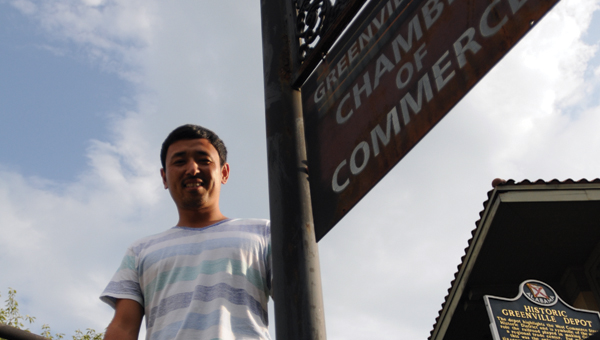 Kazakhstan’s Timur Balymbetov made a stop in the Camellia City on Monday. (Advocate Staff/Andy Brown)

Timur Balymbetov is a world traveler.

The Kazakhstan native has visited nearly a dozen countries, including the United States where he has traveled to 16 states. His latest trip led him to the Camellia City on Monday.

“It’s such a neat town,” Balymbetov said. “I love the (Ritz Theatre). It has so much character.”

Balymbetov has been in the U.S. since July 1 visiting friends. He has spent time in Mississippi, Louisiana, Florida and Alabama, and has a trip to New York City planned before returning to Kazakhstan.

Balymbetov, who majored in English language at a Kazakh university, first visited the States in 2004. He’s made at least one trip to the U.S. each year since. During that time, his perception of the U.S. has changed greatly.

“When I came the first time I thought the U.S. was just one big Disneyland with Hollywood celebrities and Coca-Cola all over the place,” he said. “The more I have come, the more I see that Americans are real people and they have real problems just like anyone else. What I think makes America different is that the people here believe, and rightfully so, that it’s their responsibility to make this country great. They are in charge. I’ve been a lot of places, and that’s not something I have experienced anywhere else I have been.”

Balymbetov said he became interested in traveling after graduating from college.

“I actually skipped my graduation party to fly out to the States,” Balymbetov said. “I love to travel. I love meeting new people. I love experiencing new cultures. It’s exciting.”

Balymbetov’s travels provide him with the opportunity to experience other cultures, but they also give him a greater appreciation for his own culture.