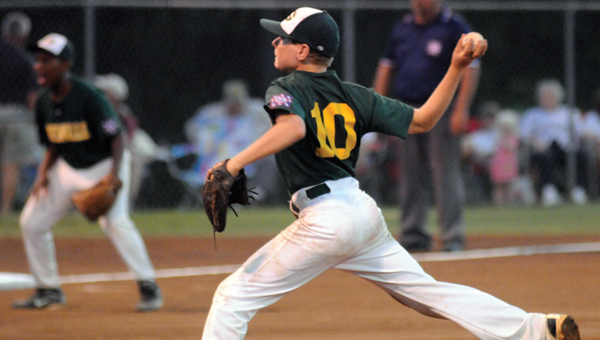 Greenville right-hander Luke Taylor delivers a pitch to the plate during the District 9 tournament in Greenville. Taylor and his teammates will take on Hokes Bluff today at 2 p.m. In the first round the Dixie Youth State Tournament. (File Photo)

After putting away their competition at the district level, the Greenville Dixie Youth Majors are now preparing to play in one of the biggest games of their careers.

With the stakes higher than they’ve ever been, head coach Keith Taylor had only a few words of advice for his players — take it easy.

“You’ve got to relax and have fun,” Taylor said. “There’s a lot at stake, but you can’t play your best in you’re nervous and uptight.”

History dictates that when his team plays in a relaxed manner, it can produce positive results.

Taylor credits this approach for his team’s district victory against Crenshaw County, a team that had already defeated them once in the tournament.

“That was the difference,” Taylor said.

“We were a lot more loose and carefree, and that’s the attitude we want to have going into the state tournament.”

But Taylor understands that attitudes only get you so far.  You still have to be prepared to play the game, and correcting past mistakes has been a focus in the weeks leading up to the tournament.

“Consistency was key in our performance at the district tournament,” Taylor said.

“We didn’t consistently hit the baseball in our loss, and that’s something we plan to address.  When they hit the ball, they hit it as well as any bunch I’ve ever coached.”

Taylor said that he was pleased with how his team is performing in other respects, citing in particular his team’s outstanding defensive play.

Pitching has been a huge factor in the team’s success, and he continues to count on excellent performances from Luke Taylor and Zach Price in that regard.

But when asked about Hokes Bluff, Taylor said that there isn’t really a set game plan.

Instead, he plans to focus more on what his team can do well instead of what their opponent is doing.

“The main thing we plan to do is to pitch two pitchers in the first game, and we’re just going to see if we can hit the ball well enough to win the game,” Taylor said.