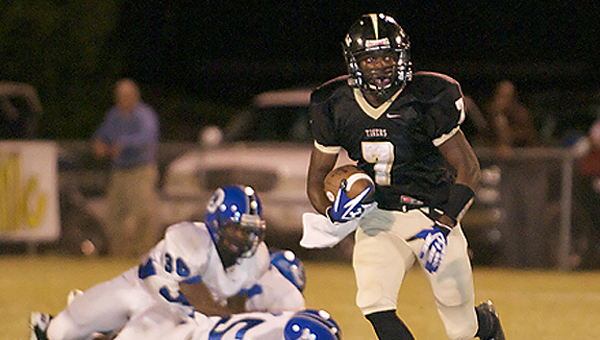 Jamall Hamilton has been a chink in the armor of many defensive units as a wide receiver/return man for Greenville High School.

The speedster led the Tigers to a near-flawless 2011 season, contributing several clutch plays in more than a few games.

While those high school experiences shaped the athlete he is today, perhaps none has had as much influence on him as All-Stars Sports Week.

The Alabama High School Athletic Association (AHSAA) All-Stars Sports Week is the be-all-end-all event in high school athletics for the state of Alabama.

Anybody who’s anybody is there, but it is safe to say that very few of them were more excited to be there than Hamilton.

“It felt great,” he said of receiving the invitation to the event. “When I first learned that I was playing, I got very excited.”

The main reason for the excitement was probably due to his competitive nature, and he acknowledged that Sports Week, and the accompanying pool of talented athletes, provided a unique challenge.

“It was kind of good to play with different people that I didn’t know,” Hamilton said.

Hamilton and his South teammates dropped a 34-12 decision to the North All-Stars at Cramton Bowl.

While the experience was a good one for him, Hamilton admitted that there wasn’t any one particular thing about the event that he enjoyed more than anything else.

Most of the enjoyment, he said, came from being away and experiencing how things worked outside of Greenville.

While the athlete remains undecided regarding future plans, one thing is a given — he definitely plans to keep playing football.

“I’m going to try to start at a junior college first, and then hopefully transfer to Faulkner, Troy or Alabama State.”