McKenzie sticking to its guns 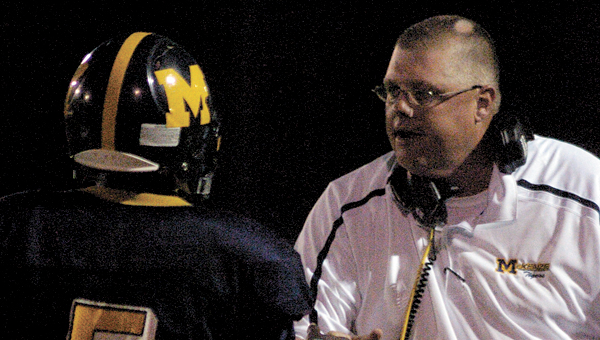 What does a coach do when his star player and the center of his offense graduates?

According to McKenzie head coach Miles Brown, the answer is simple — he sticks to his guns.

“I’m going to stay with what we do the best, and what our kids have come up with,” Brown said.

Last season’s starting quarterback Sir Wallace Presley was a true all-purpose player in many respects, but Brown is already making moves to ensure the future of his offense.

Brown said that sophomore and lefty Terrance Clemons will be the new starting quarterback, and he is having a great summer.

“He’s doing a lot of good things for us, and he’s getting better and better each day,” Brown said.

And the Tigers will need Clemons to keep up the pace, because the aerial assault will be a heavy focus.

“This summer we’re spending a lot more time working on our passing game, which is true any time you work with a quarterback change,” Brown said. “Defensively, we’re working a lot on secondary and linebacker stuff, mainly through 7-on-7 games.”

With the depth chart in order, Brown has set conditioning as a priority.

The Tigers will meet three times a week on Monday, Tuesday and Thursday throughout the month of July for summer workouts. That encompasses about three hours of work each day, including weight lifting and speed training.

Near the end of the summer, the team will start to focus on work for 7-on-7 games, including a tournament in Samson and Straughn in the near future. The Tigers will also serve as hosts for McKenzie’s very first 7-on-7 tournament on July 24.

Brown said that everything his team is doing now is influential to his team’s future success.

“As with any type of installation of new things, you do a lot of that work during the summer,” Brown said. “7-on-7 games allow the defense to work on timing and adjustments and, offensively, the timing of the pass routes and how to attack different coverages is instrumental.”

While 7-on-7 games are vital to getting used to the speed of the game, Brown doesn’t place too much emphasis on them.

“The thing is that 7-on-7 games are great, but I want us to be competitive people no matter what we do,” Brown said. “There are no records being kept of who won 7-on-7 games and, when it comes down to it, it’s all about putting on those pads and finding out which team is more physical.”