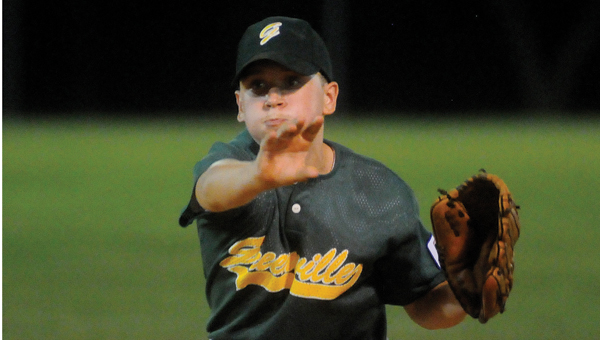 Greenville's Mason Keen watches his throw to first during a game in the district tournament in Troy on Friday. (Staff Photo/Thomas Graning)

Ashford scored a 12-8 victory Friday to bounce Greenville from the Dixie Boys District 6 tournament in Troy.

Greenville led 7-4 heading into the sixth inning but Ashford scored five runs in the frame to take a 11-7 advantage.

Austin Vickery was 3-for-3 with a walk and scored four times in the game and finished 5-for-6 for the tournament.

Greenville exploded for five runs in the third inning. Brandon White, Tanner Cartwright and Clayton McMeans all had hits in the inning. Vickery and William Sherling would walk and later score. McMeans would finish 2-for-3 with a pair of RBI.

Leading 6-1, Dothan scored nine runs in the sixth inning to defeat Greenville 15-1 in the Dixie Boys District 6 tournament in Troy on Thursday.

Dothan’s Hayden Payne struck out 12 batters and allowed just three hits in six innings of work on the mound.

For Dothan, Brent Long and Cade Bonds were each 2-for-3. Payne, Logan Herndon, Bryant Roney, Casey Applin, Ethan Crews, and Will Bridges also had hits.

Brandon White singled and scored in the second inning for Greenville’s only run. Austin Vickery was 2-for-3 in the loss.