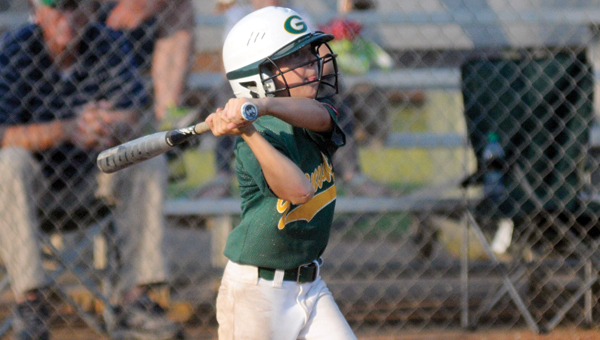 Greenville’s Davis Gaston takes a swing at a pitch during the District 9, Sub-District 2 tournament in Greenville. Gaston and his All-Star teammates were bounced from the District 9 tournament on Wednesday. (Advocate Staff/Andy Brown)

The Greenville Dixie Youth AAA All-Stars dream of a World Series title is over.

A 12-7 loss to the Enterprise Americans on Wednesday night in the District 9 tournament in Kinston ended the squad’s season.

The Enterprise win avenged a 15-4 loss to Greenville in the opening round of the tournament.

“We had two starting pitchers that went out early with injuries and one from the day before,” Greenville head coach Jimmy Clark said. “That made it hard for us on defense. Enterprise hit the ball pretty good and we just didn’t make the plays we should have.”

Offensively, Greenville also struggled to put runners on base.

“When we hit, it was hard to get it past them,” Clark said.

Greenville was bounced into the losers’ bracket with a 6-4 loss to Eufaula on Tuesday night.

“Eufaula had some great pitching and they  played good defense against us,” Clark said. “I had heard about their No. 1 pitcher and everything I heard was true. After the game I told him that he did an awesome job pitching. That was a tough loss for us.”

Clark credited his team for never giving up.

“They fought back as hard as they could, but just couldn’t pull it out,” he said. “I feel like there is a lot of talent on this team and I believe we will see these boys again in the years to come. It has been a privilege to coach this team and play ball with these kids.”