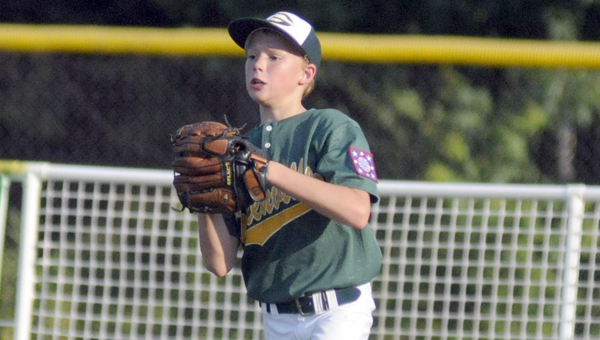 Greenville center fielder Moe Moseley banged out a hit and scored a run in the Dixie Youth AAA All-Stars’ 15-4 win against the Enterprise Americans Monday night in the first round of the District 9 tournament in Kinston. (Advocate Staff/Andy Brown)

A four-run first inning propelled the Greenville Dixie Youth AAA All-Stars to a 15-4 win against the Enterprise Americans Monday night in the first round of the District 9 tournament in Kinston.

“Anytime you are the visiting team you want to stick as many runs up there as you can in the first inning, and then go out and play good defense,” Clark said. “That’s what we were able to do.”

“We hit the ball hard,” Clark said. “When you’re dealing with 9 and 10 year olds you never know how they will play, but our kids showed up ready to play and really hit the ball well, and we played good defense and got good pitching.”

Clark earned the win on the mound after tossing the first three innings and allowing just one run. Andrew Williams came on to close out the game and tossed the final three innings.

Greenville will face Eufaula on Tuesday at 8 p.m. in Kinston.