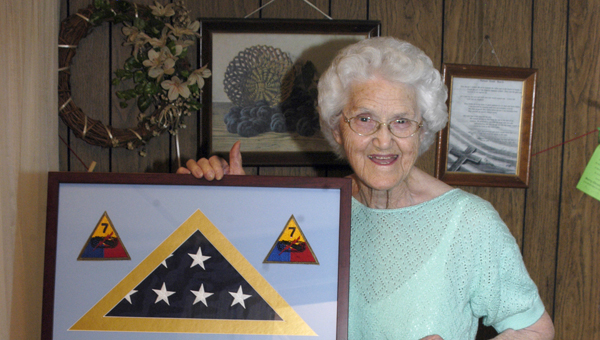 Willie Elizabeth Freeman Butts, 91, of Fort Deposit, sister and last surviving sibling of Cpl. Toulman Y. Freeman, shows off a 48-star U.S. Flag, which would have flown at the time of his death. The flag, along with a number of medals earned by Freeman, were presented to Butts June 23 at Bethany Baptist Church in Crane Hill, Ala., where Freeman is buried. (Advocate Staff/Fred Guarino)

They say home is where the heart is.

The Purple Heart earned by Cpl. Toulman Y. Freeman, a 22-year-old anti-tank gun crewman who was wounded in Holland and died in an evacuation hospital in Belgium in 1944, recently found its way home to its rightful heir in Fort Deposit.

The story of the medal’s journey is one of enduring love, a nursing home employee’s care and the perseverance of a Vermont Army National officer.

Also presented to her were a 48-star U.S. Flag, which would have flown at the time of Freeman’s death, military patches and other medals he should have received.

The ceremony was held at Bethany Baptist Church in Crane Hill in Cullman County, Ala., where Freeman is laid to rest.

Capt. Zachariah L. Fike of the Vermont Army National Guard made the presentation.

Freeman was in the 7th Armored Division called “The Lucky Seven,” according to his nice Faye Hood of Fort Deposit. He was shot in the leg during the Allied liberation of Holland, died of his injuries at an evacuation hospital and was buried in Belgium.

Although his widow, Estelle Freeman, later married Audrey Lawrence Clayton, with whom she had children, she always carried Freeman’s Purple Heart, according to Butts.

“This was the one my sister-in-law had, and she carried it with her everywhere she went,” Butts said.

Estelle Freeman Clayton died in 2008 at Robertsdale Nursing Home in Robertsdale, Ala.

According to Hood, after Clayton died, the medal was found in the lint of a broken dyer at the nursing home.

“The dryer broke down and they pushed it aside. And so, after she (Estelle) passed away, they were getting ready to do some work on that dryer,” Hood said.

She said in the lint container they found the back of an earring, a broken chain, a rosary and what appeared to be a battered tear shaped piece of medal engraved with name Toulman Freeman on it.

“And that was it,” Hood said. “It was mixed up in the lint in a dryer. So, when they found it, they put it in just a little bag and put it in the storage room at the nursing home.”

She said at the first part of June nursing home staff were cleaning out that storage room and came across the medal.

“And this Mrs. (Tina) Pardue that worked there, she took it upon herself to try to get in touch with the (Military Order of the Purple Heart) and to find out what she needed to do with it because they had no record of a Freeman that had ever been at the nursing home,” Hood said.

She explained the nursing home had Estelle listed as a Clayton not realizing that she still carried the name of Freeman as her middle name.

She said that is when Capt. Fike got involved.

“He wanted to make sure that the rightful owners or the rightful heirs to Toulman were able to get this medal back,” Hood said.

“Since I am a genealogist, I went to ancestry.com and found his family tree which had been posted by his niece, Delores Freeman Cork, which included her own father’s obituary, said John E. Bircher III, director of public relations for the Military Order of the Purple Heart.

“That’s how we discovered that he had a living sister. Also at Ancestry, we were able to get a copy of his enlistment papers. From there, it just snowballed – Zach (Fike) found the website for the 7th Infantry Division and made a post about Toulman Freeman, which was read by someone in the town in the Netherlands which had erected a memorial, including Toulman’s name, for having saved the city,” he said.

Hood said Fike was also injured and he actually received a purple heart. “So now what he is doing is volunteering with the (Military Order of the Purple Heart).”

Hood said the big story is all of this is the effort by Fike to return the medal.

“The thing I think about the most is the story itself and how this Capt. Fike just took it upon himself to make sure that the heirs to that Purple Heart and the other medals were presented to them the way it should have been done many years ago to the widow that never got to experience that,” She said.

Butts said the medals bring her brother’s memories to life for her again.

“I’m excited to have them,” Butts said of the medals. “And too it makes me remember him more too.”

Butts met her own husband in the shipyard in Mobile, Ala. in 1945, married in Greenville and has lived in Fort Deposit since.

Hood said the Purple Heart was refurbished with a new ribbon and profile of George Washington.

She expressed her appreciation that the Military Order of the Purple Heart actually took time and persevere to find out who those medals needed to go to.

“It just shows that there are people out there who really work hard for the veterans and their families,” she said. “Because if he (Fike) had not really been interested and persevered and been diligent in doing what he does then it (the lost and found medal) would have just have probably gone by the wayside.”

“It’s a small price to pay, to honor a soldier who paid the ultimate amount by sacrificing his life so that we can live free,” he said. “These ceremonies allow Americans to remember these sacrifices and in many cases brings closure to those families who lost so much some 60 years ago.

“I would ask that those who are currently in possession of these precious medals or who will be presented with that opportunity in the future, to reach out to the Military Order of the Purple Heart, so that together we can honor these Veterans appropriately,” Fike said.

“I would give all my time and money time and time again, to experience the excitement, to share the sense of pride, and to see the smile on Mrs. Butts face when her brother’s Purple Heart and spirit came home to Alabama,” he said.

Toulman Freeman enlisted in the Army on Dec. 2, 1942, at Fort McClellan, Ala.