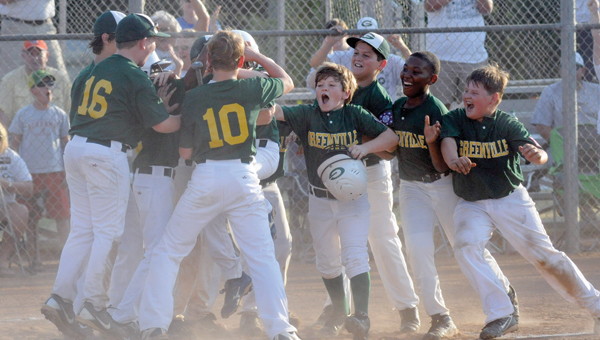 The Greenville Dixie Youth Major All-Stars congratulate Taite Watson after his solo home run in the top of the third inning of a 12-2 win against Crenshaw County Wednesday night. (Advocate Staff/Andy Brown)

On Wednesday night, Greenville’s Dixie Youth Major All-Stars avenged an earlier loss to Crenshaw County not once, but twice.

After falling to Crenshaw County 4-2 on Saturday, Greenville battled its way out of the losers’ bracket and into the championship round of the District 9 tournament, where it was pitted against Crenshaw County.

This time, Greenville came out on top. It won the first game 12-2 to force a second game, which it squeaked out 3-2 to claim the tournament title.

“We were just so nervous (on Saturday),” head coach Keith Taylor said. “I don’t know why, but we were playing like we were afraid. We had a meeting on Sunday afternoon, and we talked about how this was just a baseball game, and it was nothing to be afraid of, and the kids came out and were a lot more lighthearted the rest of the tournament.”

In the opener Wednesday night, Greenville got a single run in the first inning before exploding for six runs in the top of the third. The rally started with a solo home run off the bat of Taite Watson. Braxton Daniels and Sullivan Harold each had two RBIs in the inning, while Zach Price plated a run with a double to extend Greenville’s lead to 7-0.

Greenville added another run to its lead in the top of the fourth inning when Sawyer Hennis smacked a one-out home run.

Greenville got four more runs in the top of the fifth, and then held Crenshaw County to two runs in the bottom of the inning to earn the win.

“We hit the ball a lot better,” Taylor said. “From top to bottom our kids did a much better job of putting the ball in play.”

In the second game, the hits didn’t come quite as easy. Greenville plated three runs in the bottom of the first inning thanks to two hit batters, a walk and an RBI single from Trevor Langford.

Those would be the only runs Greenville would muster, but it would prove to be enough.

“We played really good defense in the second game,” Taylor said. “The infield and the outfield both played really well, and came up with big plays when we needed them.”

Taylor also credited his pitching staff with helping his team claim the title.

“Pitching was the difference in the tournament,” he said. “We got good pitching from everyone on our staff, and that was a big factor in us coming back to win the tournament.”

Greenville will now face Hokes Bluff in the first round of the Dixie Youth Majors state tournament on July 21. First pitch is slated for 2 p.m. in Hokes Bluff.