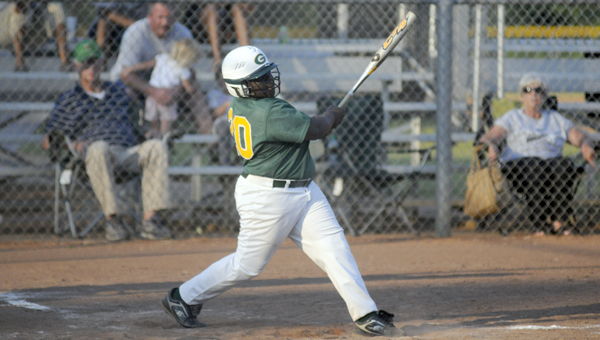 Greenville's Jamar Jackson watches his two-run home run sail over the fence during the first inning of Greenville's 16-5 win against Crenshaw County in the championship game of the District 9, Sub-District 2 tournament in Greenville. (Advocate Staff/Andy Brown)

A seven-run first inning powered the Greenville Dixie Minor All-Stars to a 16-5 win against Crenshaw County and the District 9, Sub-District 2 championship Tuesday night at the Greenville Softball Complex.

The seven-run inning erased an early 4-0 deficit, and was highlighted by a two-run homer off the bat of Jamar Jackson that came with one out in the inning.

Crenshaw County pushed a single run across in the top of the second inning to trim the lead to two runs, but Greenville responded with four more runs in the bottom half of the inning to extend its lead to six runs.

Davis Gaston started the two-out rally with a bloop single. Cameron Meyers then reached base after being hit by a pitch and Andrew Williams loaded the bases with an infield single. Clark belted a bases-loaded double to plate two runs and Austin Williams banged out an RBI single to score two more runs.

After Gaston retired the Crenshaw County hitters in order in the top of the third, Greenville pushed five more runs across the plate in the bottom of the inning.

Jackson and Meyers each had an RBI in the inning, while Drew McClellan plated two runs with a one-out double.

Gaston retired the side in order in the top of the fourth inning to seal the four-inning, mercy-rule win.

“We got good pitching from Austin and Davis,” Clark said. “They both threw the ball well, and when (Crenshaw) did put the ball in play we made plays on defense. That was all a contributing factor to us winning that game.”