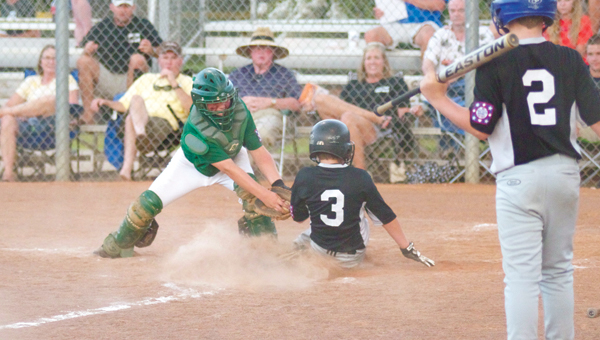 Greenville’s Trevor Langford attempts to tag Crenshaw County’s Trey Lowery as he slides across home plate during Crenshaw’s 4-2 win on Saturday in the second round of the Dixie Youth Majors District 9 Tournament. (Advocate Staff/Patty Vaughan)

A three-run home run powered Crenshaw County to a 4-2 win against Greenville in the second round of the Dixie Youth  Majors District 9 tournament.

Greenville took an early 1-0 lead in the first inning, but saw it wiped away with the home run.

“Our two pitchers did well, and the defense was pretty good,” Greenville head coach Keith Taylor said. “We had a couple of errors, but that happens with 11 and 12 year olds.”

Crenshaw responded and sealed the win when Trey Lowery doubled and plated a run to cap the scoring at 4-2.

“We struck out way too many times and watched too many third strikes go by,” Taylor said. “When you don’t hit the ball you don’t score runs, you don’t win. I’m really disappointed.”

Greenville rebounded to score a 16-4 win against Coffee County on Monday night, and will play New Brockton tonight.