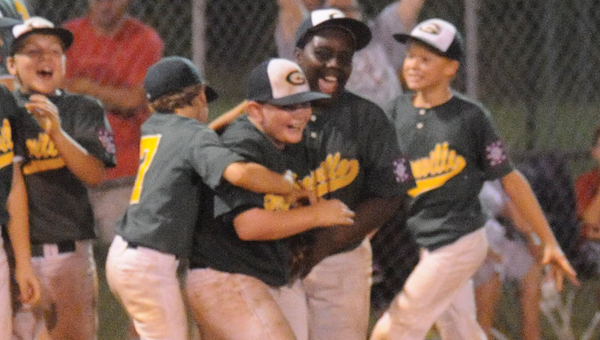 “I knew that it was going to be a game,” Greenville head coach Jimmy Clark said. “I knew it wasn’t going to be one of the games that we would win 13-0.”

Troy started out strong taking an early 3-0 lead in the first. However, Greenville was right back in the game after Evan Clark hit a double, stole third and then scored on a base hit.

It was the top of the fifth inning with Greenville down 2-6 that the team found some momentum and knotted the game at 6-all to force extra innings.

“It was just one of those deals that we had to keep fighting,” Clark said. “They fought back and we tied it up in the fifth inning.”

The nail biting became fierce when Troy loaded the bases with one out in the bottom of the eighth inning.

“We had to have one of those calls where Troy had one on second and one on third and the kid batting was hitting the ball in the field all night so we had an intentional walk to get the infield up to make a play at home plate on the fourth run,” Clark said.

The timing could not have been more perfect for Greenville as an infield hit got the Troy runner out at home and quick thinking led to a double play as the catcher threw to third ending the inning.

“It being a double play was just icing on the cake,” Clark said. “It was only meant to get one at the plate and to get two was just great.”

Greenville scored the winning run when Jamar Jackson  was caught stealing home, but a Troy error allowed the go-ahead run to score.

“When he stole home and got out home, I was looking at my runner from second and he was watching the play,” Clark said. “I’m jumping up and down telling him to get on base, because he’s a good 10 feet from second base.”

Troy’s catcher realized this and tried to throw to second for an out but overthrew the bag. The runner was able to tag second, third and run home for the win.

“Basically, by the time we got through, I told them all, whatever happens, win or lose, I’m more proud than anything because they came from behind,” Clark said. “That’s what’s it all about. Making them understand that whether you win or lose, it’s how you play the game.”

Greenville will play Crenshaw County tonight for the title.