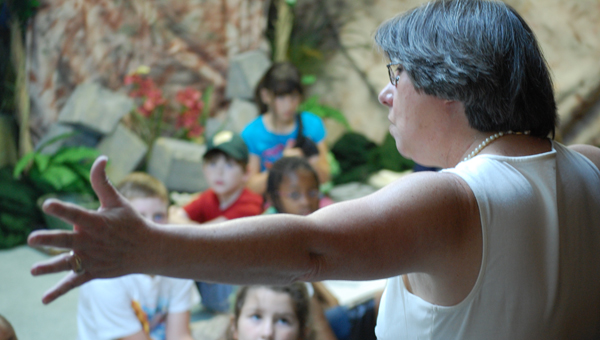 Ann Blackmon teaches a lesson from the Bible to a classroom full of children on Thursday as part of the Vacation Bible School at Southside Baptist Church. (Advocate Staff/Patty Vaughan)

“Everything is possible with God.”

That’s the message more than 200 children are learning at Southside’s Vacation Bible School.

For the past week, children between the ages of 4 and sixth grade have been rotating in and out of crafts, theater productions and outside games to create a better understanding of God.

“Everything is possible with God so when they go to their groups, that (theme) is reinforced everywhere they go,” Children’s Minister Karen Watkins said.

Children rotate with similar age groups to work with about 100 volunteers.

“We’re a total of about 300,” Watkins said. “We’re running a little over 200 (children) this year, which is low for us. We’re down a little bit this year, but we still have plenty of kids.”

Through stories and lessons that follow different themes every day, children are receiving a hands on experience including visits from the VBS mascot, Chadder.

“We have Chadder’s theater,” Watkins said. “He’s our mascot, which is a big ol’ chipmunk. They do theatre where they see a cartoon each day with the discussion and it all ties in to our theme.”

The week ended with a celebration of going to see Madagascar 3 at The Edge Theater. Despite not having a biblical theme, Watkins believes the movie portrays an all-around good message.

“It has the same theme even though it’s not biblical,” Watkins said. “The moral lesson is the same – to keep on trying.”

Watkins and her team of volunteers have already decided that next year’s theme will be medieval.

Even through all the themes, crafts and fun, Watkins said the main purpose is for the children to learn about salvation.

“It’s all about salvation,” Watkins said. “It’s all about changing lives, and we think we are very successful if we have someone that accepts Jesus as their forever friend.”