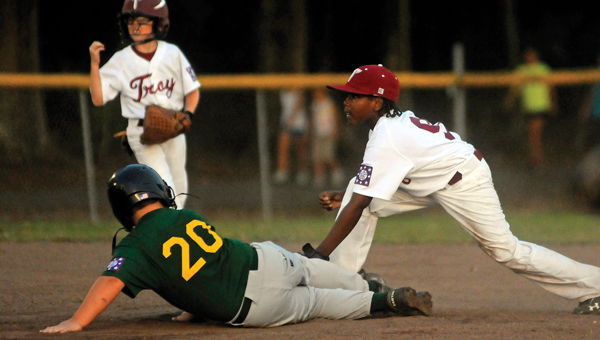 Troy’s Quay Rodgers attempts to tag Greenville’s Jacob Nichols out during a tournament in Luverne on Monday. Nichols was ruled safe on the play due to interference at first base. (BNI Staff/BNI STAFF/Thomas Graning)

Troy’s Pitching Machine tournament team remained unbeaten in the district tournament after a 17-2 thrashing of Greenville on Monday.

Troy used a relentless offensive attack to earn a bye on Tuesday and will play in the championship game on Wednesday.

Cardwell laced a double to fence in the fourth inning to score Huner from first to invoke the 15-run mercy rule.

Troy scored three runs in the first inning, six in the second, four in the third, and five in the fourth to down Greenville.