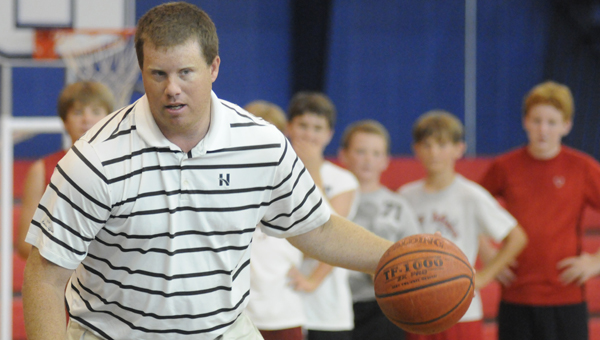 When Fort Dale Academy headmaster David Brantley started the search for a new junior varsity basketball coach, he knew exactly whom he wanted to hire.

“We had been trying to get him here for a couple of years now, and it just never worked out,” Brantley said.

That is until now. On Monday Brantley announced the hire of Fort Dale graduate Marshall Watts as the new junior varsity basketball coach and football coach.

“Marshall is a member of our family, and we’re excited to be bringing him home,” Brantley said.

Watts, who spent nearly six years at Cottonwood High School as the varsity boys’ basketball coach, said he’s excited to have the opportunity to return to his alma mater.

“I loved being at Cottonwood, but my wife and I have an 8-month-old son and we wanted to get back home and be around family,” Watts said. “We both graduated from Fort Dale and we’re just excited to be coming home. We’ve tried to come back on the weekends as much as we could, so at least now we’ll be saving some gas money.”

According to Brantley, Watts will be teaching history and will also assist with varsity football and basketball.

“Marshall will be an excellent addition to our faculty and coaching staff, and he’ll be a good role model for our students,” Brantley said. “We couldn’t be more excited about Marshall coming back to our school.”

Watts, a 2000 graduate of FDA, scored more than 1,000 points in his career and led the Eagles to a runner-up finish in the Alabama Independent School Association state basketball tournament in 1999.