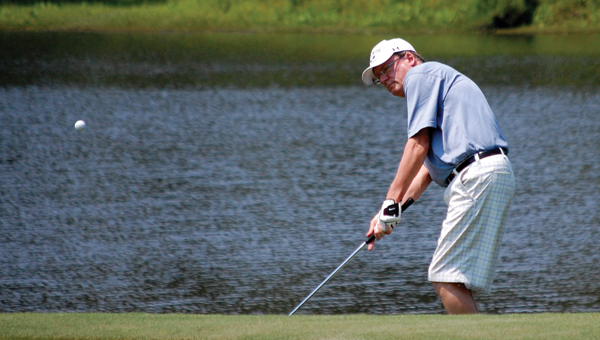 Auburn’s Jim Hansen chips the ball onto the green during the second round of the Cambrian Ridge Father-Son Championship. Advocate Staff/Patty Vaughan

Hamp Andrews and Billy Andrews enjoyed winning last year’s Cambrian Ridge Father-Son Championship so much, the Daphne natives decided to do it again this year.

The pair fired a two-day score of 120 to successfully defend their 2011 title. Not only did they best the field of 120 teams, but they also bettered their score from last year by three strokes.

Greenville natives David Hancock and Sanders Hancock earned a third-place finish with a two-day score of 125.

Fathers and sons came from 14 different states across the country, including Maryland, Illinois and California, to take part in the event. The tournament, which began with 13 teams 14 years ago, has grown in popularity over the years.

“Right now, we have 120 (teams). We’re full. We even had a waiting list this year,” said Danny Foster, director of sales and marketing for Cambrian Ridge.

Both Foster and Bryan Reynolds, Cambrian Ridge director of golf, believe the tournament is a great way to bring people into the Greenville area and provide a boost to the economy.

“You only have three teams from Greenville,” Reynolds said. “That leaves you about 117 teams that are eating at night here, and 117 hotel rooms being rented.”

Many of those golfers began to trickle into Greenville a day ahead of the tournament.

“They came in on Friday, and most of them played a practice round,” Foster said. “So you had Friday night and Saturday night at the hotels. That was a big boost for the City of Greenville.”

The Father-Son Championship is unique to Cambrian Ridge.

“What makes us feel good is that people come up and say, ‘Hey, we love it, we’re coming back,’” Foster said. “It’s a lot of long hard hours but it’s great to get the enjoyment of seeing them play in it.”