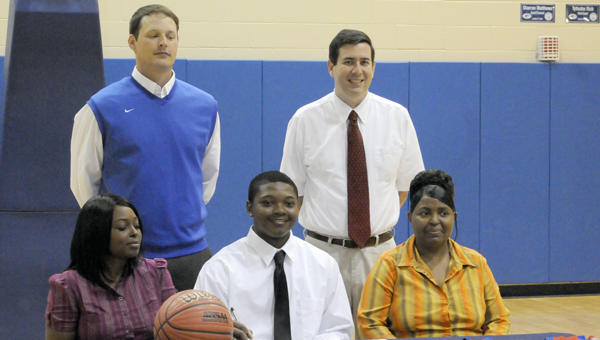 It didn’t take long for Jefferson Davis Community College head coach Allen Gainer to figure out what folks in Georgiana have known for quite some time.

It also didn’t take him long to decide he wanted that talent on his team.

“We had Adrian come down for our tryout and of the 54 guys we had there, he was clearly the most talented guy in the gym,” Gainer said.

Gainer had seen all he needed to see. He offered Rich a scholarship, and on Friday, the Georgiana senior signed to play for the Warhawks.

“It feels great,” Rich said with a smile. “I’ve been excited all week. I told my mom when I made the decision and she’s been talking about it every day since then.”

As a senior at Georgiana, Rich averaged 16.8 points, 12.1 rebounds and 2.1 assists per game from his forward position and led the Panthers to a 24-8 record and a runner-up finish in the state tournament.

At JDCC, the 6-foot-4 Rich will likely play shooting guard or small forward.

“We’re hoping to play him at a 2 or a 3,” Gainer said. “If he goes to a four-year school he’s going to be a 2 or a 3, so that’s where we’d like to play him, but to be honest we’re pretty small right now. Where he plays will depend a lot on who we sign in the next couple of weeks.”

Gainer said that the Warhawks typically play with four guards on the court and that  Rich will likely be on the perimeter when JDCC has the ball, but may be called upon to play inside on the defensive end of the court.

Rich just wants to be on the court.

“After the tryout Coach (Gainer) came up to me and asked me who the biggest guy I guarded this season was. I told him he was probably 6-foot-8 and 240 pounds. He asked if I was able to stay between him and the basket and rebound and I told him I could.”

That’s all Gainer needed to hear.

“He said he did it every night (this past season) and that he could handle it,” Gainer said with a grin.

“That’s all we needed to hear.”