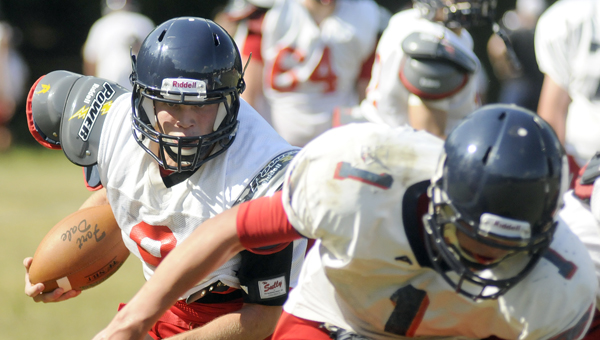 Fort Dale Academy junior Ryan Taylor carries the ball during a drill on Monday. Taylor and the Eagles will wrap up their spring practice schedule May 11 with a jamboree at Wilcox Academy. Morgan Academy will also take part in the jamboree, which is scheduled to begin at 2:30 p.m. File Photo

Fort Dale Academy is trading its shotgun for a pistol.

The Eagles, who finished their 2011 campaign with a 4-7 mark, are transitioning from a shotgun offense to a pistol offense.

“We feel like our personnel is more suited for the pistol than for a traditional spread offense where you operate out of the shotgun,” Fort Dale head coach James “Speed” Sampley said.

University of Nevada head coach Chris Ault developed the pistol offense in 2004 as a way to add a power running game to the spread formation.

Just more than a week into spring practice, Sampley said the Eagles are adjusting well to the change.

“Anytime you make a change like this, it takes some time for the players to get used to it, but I feel like we’re making progress,” he said. “We spent most of last week working on installing the new offense, and the kids are adjusting well to the changes.”

Sampley said this week the Eagles have shifted their focus more to defense.

“We’re trying to balance things out a little since we spent so much time on offense last week,” he said. “They are working hard. I’ve been real proud of the effort. The kids have given great effort and have had a great attitude.”

Fort Dale will wrap up its spring practice schedule May 11 with a jamboree at Wilcox Academy. Morgan Academy will also take part in the jamboree, which is scheduled to begin at 2:30 p.m.