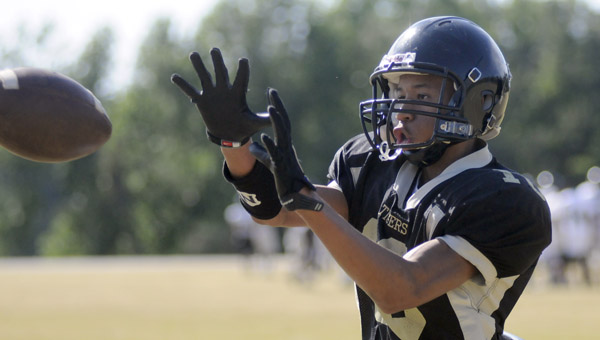 The Tigers posted an 11-1 mark and advanced to the second round of the Alabama High School Athletic Association playoffs in their first year under Hill. But the top Tiger wasn’t satisfied.

“We had a good season, but it wasn’t enough,” Hill said. “It wasn’t good enough for the kids or for us as coaches. If you don’t win a state championship, I don’t think you really did what you need to do.”

Championship or not, Hill is hoping the 2011 season helps serve as motivation for this new bunch of Tigers.

“I think it put a taste for winning in their mouths,” he said. “Now that they have tasted it, they want it a little more.”

The second-year head coach said he’s been pleased with what he’s seen so far from his team during spring practice. A season ago, Hill was on the job for less than a month before the Tigers hit the field for spring workouts. He said the environment is much different this spring than it was a year ago.

“I hadn’t been here,” he said. “I got hired at the end of April and had maybe been here for two weeks when we started spring practice. The kids didn’t know the system or really what I and the rest of the coaching staff expected from them. This season they do, and you can see it in the way they are practicing. We are much further along than we were last year.”

That can also be attributed to the fact that Greenville returns 11 starters from last season’s squad.

The Tigers return seven starters on offense, which Hill said has given that side of the ball an advantage over the defense, which returns just four starters.

“The offense is ahead, but that’s normal,” he said. “They have seven guys back, and they got a lot of reps last year. They know what we want them to do. On defense, we have some learning to do, but the effort has been there. We’ve had a good spring so far. We’ve got a lot of work to do, but we’re having a good spring, and I appreciate all the kids that have come out (for football). The thing we want to focus on is continuing to learn the game of football. Hopefully we can keep our numbers up and avoid any major injuries. If we can do those things I think we can say we had a successful spring.”

Greenville will wrap up its spring practice schedule with a jamboree in Evergreen on May 11. The Tigers will play both Hillcrest-Evergreen and Valley.