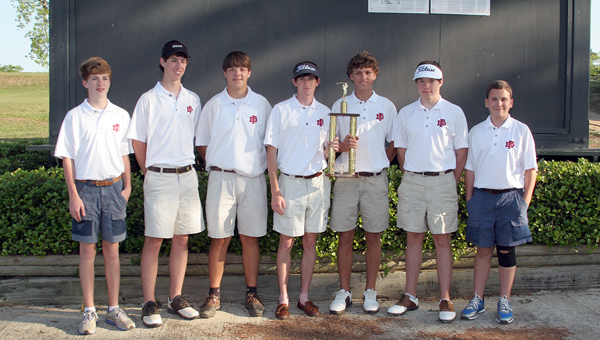 The Fort Dale Academy golf team won the FDA Tournament on April 10 and will compete in the AISA state tournament Monday and Tuesday. (Courtesy Photo)

Fort Dale Academy will ride the momentum of a first-place finish at the FDA Invitational Golf Tournament into the Alabama Independent School Association State Golf Tournament.

The Eagles, who scored their first victory of the season at the FDA Invitational Golf Tournament on April 10, will compete in the AISA championship on Monday and Tuesday. The tournament is being held at the Prattville Country Club.

“We’re anxious to compete in the state tournament,” FDA head coach David Brantley said. “We hope we’ll do well. We’re going into it with some momentum after winning our tournament.”

A year ago, the Eagles earned a fifth-place finish at the state tournament with then-junior Cam Norman claiming a third-place finish in the individual championship.

Brantley is hoping that last year’s experience, and playing a tournament at the Prattville Country Club earlier this season, will give the Eagles a leg up in this year’s competition.

“All the guys were on the team last year, so they know what to expect, and we’ve already played the course once this year,” Brantley said. “I hope the experience at the state tournament and on the course will help us play well as a team. Individually, I really think that Cam has a good chance to be the low medalist.”

Norman, who claimed medalist honors at the FDA tournament, John Coleman Poole, McKinley Lee and Patrick Russell all qualified for the state tournament.