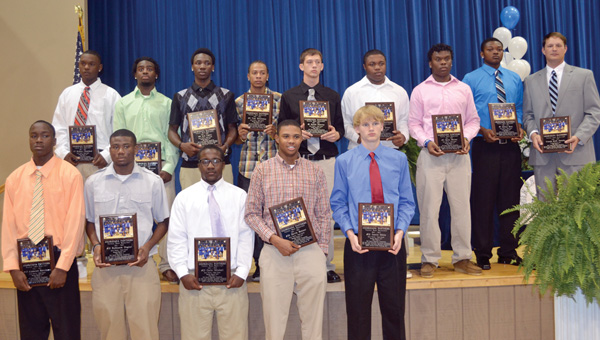 Each member of the Georgiana School basketball team was awarded a plaque recognizing the team’s achievements during the 2011-12 season. Courtesy Photo

The Panthers won the Class 1A South Regional Tournament and advanced to the Final Four for the first time in school history.

On Thursday night, the Panthers were recognized for their achievements at a dinner held at the school’s gymnasium and hosted by parents of the players.

At the dinner each member of the team was presented with a plaque recognizing the Panthers’s accomplishments.

Marcus “Zeek” Benson was presented an award for being the “Basketball Team’s No. 1 Fan and Supporter” and Angie Binion was awarded a plaque from the parents and players recognizing her for her dedication and hard work in supporting the team this season.