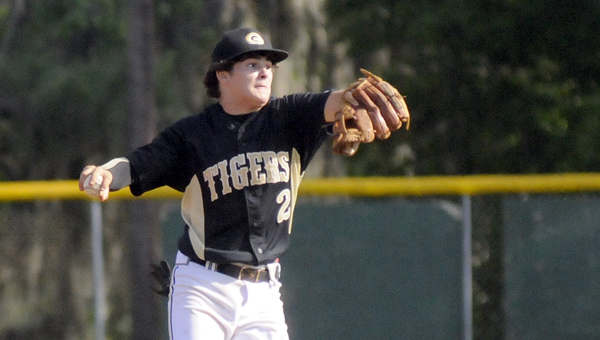 Chilton County High School swept Greenville High School out of the postseason by winning the first two games of a best-of-three series Friday.

Chilton County took Game 1 of the doubleheader 11-1 before scoring a 7-0 win in Game 2.

“We had a total of six hits in two games,” Greenville head coach Richard Kelly said. “That killed us.”

In the first game of the two-game tilt, Harper Vinson, Colby Booker and Tay Posey each collected a hit.

Booker suffered the loss on the mound for Greenville. The Tiger hurler allowed four hits and struck out four.

“Booker pitched really well for us,” Kelly said. “He left two mistakes up and they punished him for that. Good teams like Chilton County take advantage of mistakes.”

In Game 2, Vinson, Booker and Jerome Cook each banged out a hit.

Cook took the loss on the mound.

Chilton County led 3-0 through four innings before pushing three runs across in the fifth to seal the win.

“We just had too many mental breakdowns in critical moments,” Kelly said.
Despite the disappointing end to the season, Kelly said he was proud of how his team performed this season.

“The thing that made me proud of these boys is how they came to work every day at practice,” Kelly said. “They wanted to get better, and I challenged them with that from (the first day I took over as coach). We were 1-10 at that point and we rolled off six straight wins, including a county championship.”

Including Friday’s wins, CCHS has won eight consecutive games, is 31-5 on the season and is ranked No. 8 in the state’s 5A classification.